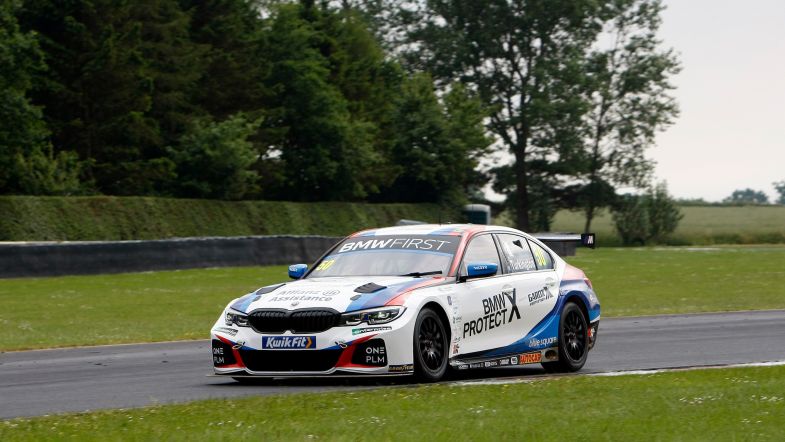 Colin Turkington proved to be the man to beat in qualifying after Croft after topping the times ahead of the latest rounds of the BTCC season.

The Northern Irishman emerged on top of a session that was halted no fewer than three times to secure a 26th career pole just two weeks after the heavy accident at Oulton Park that resulted in him being forced to switch into his 2019 title-winning car for the weekend.

Dan Lloyd, who also had to have his car rebuilt after the same incident, would also be involved in the fight for pole, which ended with the top four covered by less than a tenth of a second.

Before any quick laps had been posted, the session was halted after Adam Morgan went off into the tyres at turn one, with the Ciceley Motorsport driver able to get his BMW back to the pits after being helped from the gravel by marshals.

The session then got back underway but within a matter of minutes, the red flag flew once again; this time after Dexter Patterson got it all wrong going into Clervaux and also hit the tyres.

Like Morgan, the young Scot was able to get the car going again to return to the pits under its own steam with the action then finally getting underway in earnest with little over 20 minutes remaining.

Ash Sutton set the first of the truly quick laps in his Ford Focus, but EXCELR8 pair Lloyd and Tom Ingram then became the first two drivers to break the 1:22s barrier – with Ingram moving into provisional pole ahead of his team-mate.

Rory Butcher looked good to try and get ahead of the pair in the Toyota as he went purple in the opening sector but then lost ground and could only slot into eighth, with brother-in-law Gordon Shedden instead the one who split the leading duo as he put his Honda into second.

With team-mate Dan Rowbottom moving into fourth just before the session reached half-way, the Team Dynamics cars were right on the pace as in practice, but the same wasn’t true for the car of championship leader Josh Cook.

Cook was running in twelfth spot when he was forced into the pits with smoke pouring from the rear left with what looked to be a suspension issue.

As the field headed out for its second run, Lloyd looked to be on for a quick lap when he went purple in sector one only to then make an error in the complex that cost him valuable time, but on the very next lap, he improved enough to edge ahead of Ingram onto provisional pole by just 0.013s.

Shedden was the next driver on a quick lap and having gone fastest of all in sector one, he set a personal best in sector two only to run wide in the complex and undo all of his good work; preventing him from getting up onto the front row.

As Ash Sutton and Bobby Thompson jumped up into the top ten, Shedden tried again but for the second lap in succession, fell a tenth of a second short of the front row.

Heading into the final five minutes of the session, Jake Hill and Turkington made their move to climb up into fourth and fifth but Turkington was pushing hard and went fastest of all in the final sector on his next lap to edge ahead of Lloyd at the top.

Rowbottom then went second in his Honda heading into the final before the red flag came out for a third time with just 46 seconds left on the clock after a moment for Michael Crees saw his car left in a precarious position.

With the session not being restarted, Turkington therefore topped the times in his BMW although questions remain over whether the WSR car will be able to start from pole when it had to pushed off the weighing scales at the end of the session.

Rowbottom would end up second quickest ahead of Lloyd and Ingram, with the top four cars covered by just 0.076s, with Shedden and Hill rounding out the top six.

Sutton was seventh quickest in the Focus ahead of Tom Chilton – who produced his strongest session of the campaign to take eighth – with the top ten completed by George Gamble and Aiden Moffat.

Returnee James Gornall was an encouraging 15th with a best time only half a second off pole, with points leader Cook back in 20th after his early issue in the session.