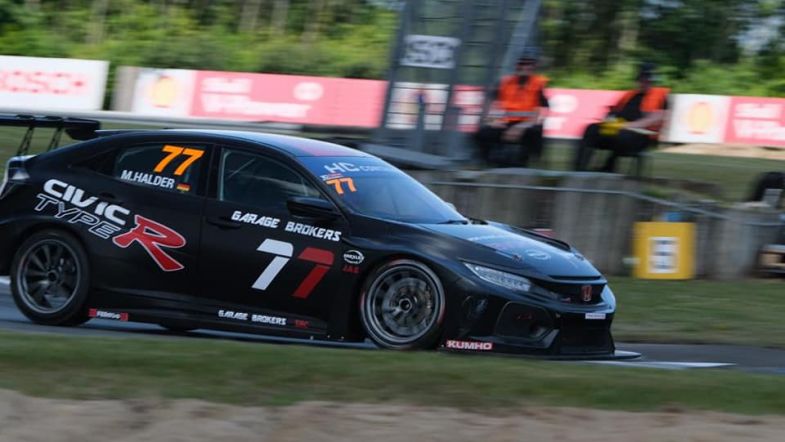 Halder holds off Jensen in Honda duel for Jyllandsringen pole

Mike Halder will start from pole for the first TCR Denmark race of the weekend at Jyllandsringen, as Hondas ruled the road in qualifying.

The TPR Motorsport driver didn’t take long to get to the top of the times in Q1 in his Civic Type R, and the TCR Europe regular went a second faster than anyone else.

GMB Motorsport’s Kasper Jensen, another Honda driver, was his closest opponent at that point but could not get any closer to Halder’s pace as traffic in the final minutes prevented most drivers from improving.

The same gap between the top two covered second down to eleventh, although the last placed of those – Rene Povlsen was the unlucky one as he didn’t progress through to Q2.

In total four Hondas, three Cupras, and one car apiece from Alfa Romeo, Hyundai and Peugeot progressed to qualifying’s second segment, where Halder was once again on it from the off.

Although he was on provisional pole almost straight away, this time Halder had a far sterner challenge as his early 1:09.944 pace was just 0.149 seconds faster than Jensen’s.

Despite there being almost half as many cars on track, there was still traffic on the 2.3-kilometre layout and the drivers pitted at the end when it became clear it was going to prove too difficult to improve their laptimes.

Allan Kristensen had problems in first practice but was able to rectify them before the second session, while Kristian Moe Saetheren only completed three laps in the morning. He told TouringCarTimes he had steering issues on his Alfa Romeo Giulietta Veloce TCR and needed to end both of his sessions early. He then skipped qualifying entirely.

The first race of the weekend starts at 13:10 CEST tomorrow.