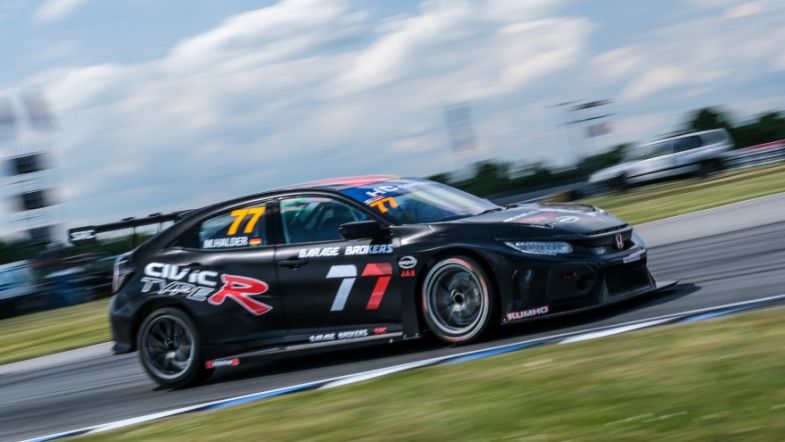 Mike Halder has now been victorious in four different TCR championships as he won the first of three TCR Denmark races at Jyllandsringen on Sunday.

The TPR Motorsport-run German made a strong start from pole and was never challenged, despite a mid-race safety car period, and finished the race just over a second clear of GMB Motorsport’s Kasper Jensen who, like Halder, was in a Honda Civic Type R TCR.

Jensen’s team-mate Gustav Birch started third but ended the first lap in sixth as he made a slow enough start that Michael Markussen was able to get alongside on the outside through the first two corners, muscle his way onto the racing line through the direction change of turn three and then leave Birch ploughing through the grass on the run to turn four.

The pair made hard contact when they reached that corner, which left the door open for the Cupra León Competición-driving Nicolai Sylvest to pass both and for Insight Racing’s Jacob Mathiassen to also clear Birch.

He recovered one place on the next lap, but that was all he could do while his team-mate fought to keep up with Halder. The mid-race safety car briefly aided his cause, but it was only out for one full lap and Halder nailed the restart to build his lead back up to a second.

The TCR Europe regular, who is also a winner in the German and Spanish championship, finished 1.2s ahead of Jensen after 13 laps, while Sylvest and Markussen were almost nine seconds back in their fight for third.

The positions below the top five mostly stabilised after the opening two laps, while those who ran into trouble early on – such as Kim König who span into the sand traps – were able to continue their races.

König’s spin was the cause of the safety car interruption, with the message to deploy it being sent out before he returned to track under his own power.