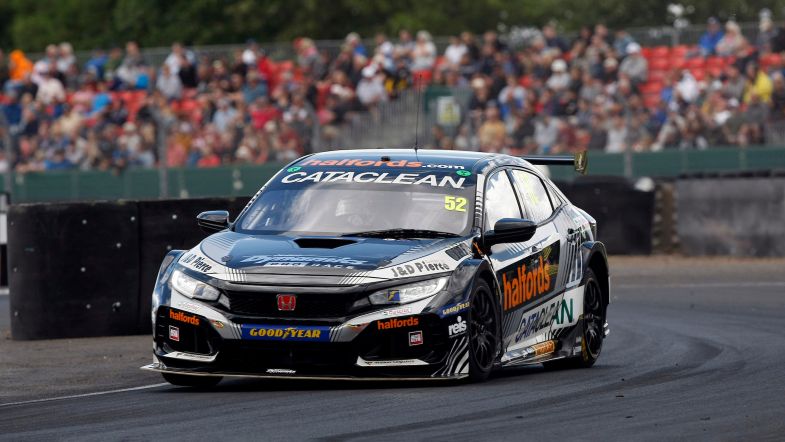 Gordon Shedden completed a fine recovery from his retirement in race one to end the Croft weekend with his second victory of the BTCC season.

The Scot had fought his way through to twelfth place in the second race of the weekend and that earned him pole position for the reverse grid finale.

Off the line, Shedden got away well from the front row as did Josh Cook, although the big mover was Rory Butcher who went around the outside through turn two in a bid to make up ground and was forced to take the escape road.

That moved him up into second spot, with the Speedworks driver allowing Cook back through on the run to Tower to avoid being penalised for gaining an advantage.

Stephen Jelley slotted in behind in fourth ahead of Aiden Moffat’s Infiniti, with Tom Chilton slipping back to sixth.

By the end of the opening lap, Shedden had a lead of a second over Cook behind, with Butcher making a move to try and take the place at tower on lap two.

Although the Toyota briefly got ahead, Cook fought back immediately to reclaim the position on the run up to the Jim Clark Esses.

Further back, Ash Sutton was dicing with Chilton for position and going into Clervaux on lap three the pair made contact, which damaged the rear suspension on the Focus and forced Sutton back into the pits.

Chilton meanwhile would be run wide through the Esses later in the lap and dropped out side the top ten.

As Shedden raced away at the front, Cook was pushing to keep Butcher and Jelley at bay, with the trio having broken away from Moffat’s Infiniti – which had a train of cars behind it.

Moffat’s car was carrying battle scars from early contact with the bonnet coming loose, and a black and orange flag meant he had to come in for repairs at the end of the sixth lap to drop out of his fifth place.

As Shedden continued to comfortably lead the race, Cook would edge away from Butcher in the fight for second place with the race settling down inside the top ten and the main battles occurring down outside the points.

Shedden duly took his second victory of the campaign at the front of the pack to complete his recovery from the race one drama, with Cook following him home to minimise his losses in the points and Butcher rounding out the podium.

Jelley led WSR team-mates Jake Hill and Colin Turkington across the line, with Tom Ingram taking seventh to maintain his lead in the championship standings.

Dan Cammish, Chilton and Adam Morgan then rounded out the top ten.