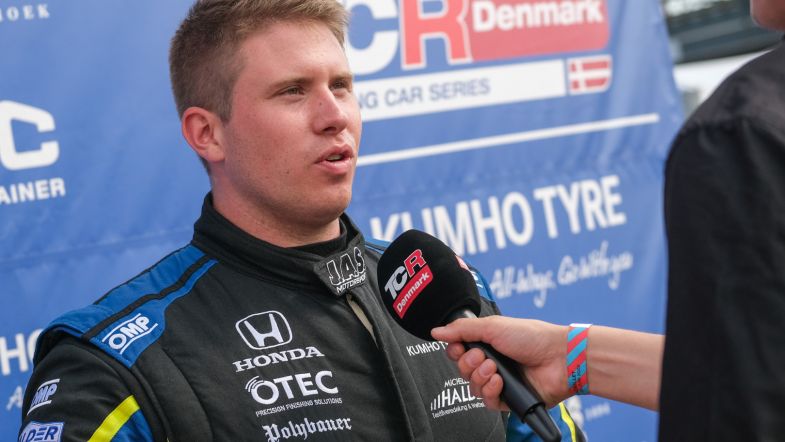 Mike Halder doubles up at Jyllandsringen

Mike Halder had to wait just two hours after taking his maiden TCR Denmark win to earn another at Jyllandsringen, as he triumphed from tenth on the reversed grid in race two.

There was drama before the start as grid confusion led to Steffen Larsen lining up on pole and then reversing down the grid, leaving Rene Junker Povlsen and Kim Lund on the front row.

Kristian Moe Sætheren then couldn’t get his Alfa Romeo Giulietta Veloce off the line, and so the safety car led the field around for another lap before they lined up again. During that formation lap, fourth in order Kenn Bach spun he was able to still line up in his grid spot.

Lund and Philip Lindberg, second and third on the grid, made bad launches and so Povlsen reached the first corner of the race comfortably ahead of Lindberg. He held on to the position through the rest of the lap too, but then rain arrived.

At the start of lap two, Povlsen slid wide exiting turn one and it allowed Lindberg to line up a move into the braking zone of turn four. He got alongside the leader, but then Jacob Mathiassen got alongside and past him and then he went to attack Povlsen while Lindberg now had Halder in his mirrors.

Lindberg was able to come back on Mathiassen on lap three as the rain worsened, diving down his inside at turn one. Halder was even more ambitious, and he went from sixth to fourth to third in the space of a few corners then did a dummy move to the outside at the final corner to actually take the inside line and move into second place behind Povlsen.

The attacks of Halder were resisted for one lap, before the German set up a move exiting turn one where he had more grip exiting the corner and slid ahead. From there it would have been domination, but the safety car was then summoned for two laps and pausing Halder’s runaway performance. In the six laps of green flag running he did get at the end, he opened up a lead of two seconds.

Lindberg passed Povlsen for second at turn four not long after Halder’s move, then Kasper Jensen was quite forceful in demoting Povlsen to fourth before the safety car came out but only actually got his move done and made it stick at the very end of the race as the worsening rain led to Povlsen sliding out of his way on the last lap.

Mathiassen finished right behind in fifth, while Nicolai Sylvest held off Michael Markussen for sixth place. There was one incident late in the race, as Gustav Birch and Kenn Bach almost spin following a collision and ended up dropping out of the upper midfield to finish ninth and 12th respectively.