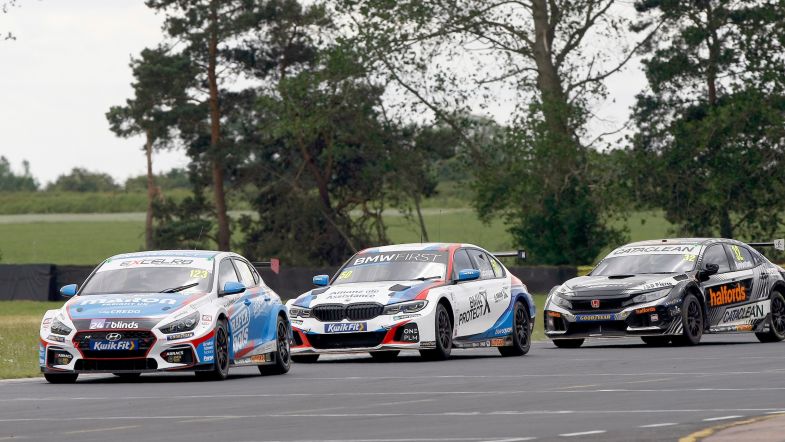 Dan Lloyd says he hopes that his strong showing at Croft will help in his quest to complete the BTCC season after the EXCELR8 Motorsport driver stormed to a double win at his home circuit.

Lloyd went into the weekend looking to repay the team for the work that had gone into repairing his Hyundai i30 Fastback N after a huge accident in the previous meeting at Oulton Park.

The bill for that repair work stands at more than £95,000, with Lloyd admitting in a series of vlogs following the incident that his damage budget for the season was less than half that amount.

Having already started the search for additional sponsors to keep his season on track, Lloyd turned his focus back to on-track matters at Croft, where he showed no ill-effect of the incident by qualifying on the second row of the grid for the opening race.

A strong opening lap allowed him to hit the front, and he was able to keep Colin Turkington at bay to secure his second career BTCC win.

A third followed in the next race as Lloyd led team-mate Tom Ingram to a one-two finish, whilst he then bagged eleventh in race three to end the weekend eighth in the standings.

“When you have had such a big accident, you always worry a bit about how good the car will be once it’s been repaired but from the moment we hit the track, I knew we were on for a strong weekend,” he said. We could have had pole on Saturday, and I fancied my chances for race one if I could get to the front.

“I don’t think I’ve ever been so focused for the start of a race as I had a plan in my head to get into second place, and then attack Colin in the first two laps when I knew he was vulnerable – so to get ahead half way through lap one was brilliant. I had to push hard to keep him behind and it was touch and go for a while, so to bring the car home was an amazing feeling.

“To then win again in race two was surreal as I felt Colin might get me at the start, but in the end I didn’t even have to defend into turn one. The car felt better with the changes we had made and to lead the first one-two for the team was great.

“Race three was all about scoring points which is what we did and it’s been the most amazing day. The results this weekend will help no end when it comes to showing what I can offer to potential partners as it’s been the best weekend I could have imagined, but I know we are still well down on the budget we need to keep our championship bid on track.

“There is an awful lot of work to do over the next month to drum up support for the rest of the season, and I certainly don’t think I’m going to be getting much of a summer break!”