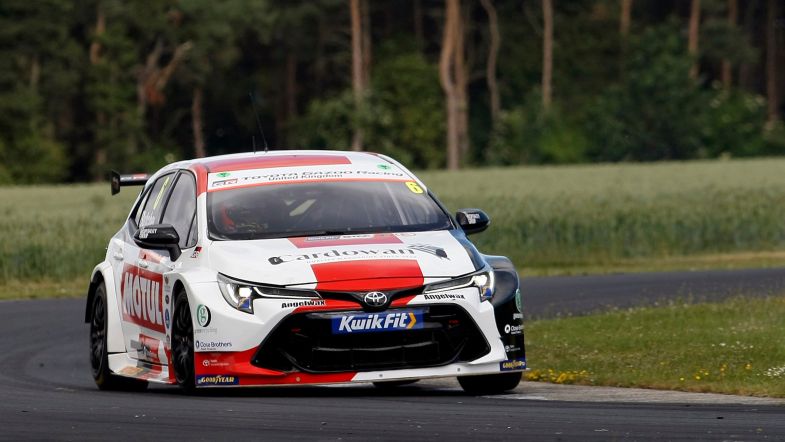 Rory Butcher pleased to enter break ‘on a high’

Rory Butcher said he was pleased to enter the BTCC’s summer break ‘on a high’ after picking up his third podium finish of the season at Croft.

The Speedworks driver headed for North Yorkshire on the back of a his strongest weekend of the year at Oulton Park two weeks earlier where he had carried his Toyota Corolla to three top-five finishes.

A tough qualifying session saw Butcher down outside the top ten on the times but a solid opening lap to race one allowed him to move up to seventh, which is where he would then stay through to the finish.

With overtaking at a premium towards the front of the field, Butcher then repeated the result in race two but a strong start to race three allowed him to jump from sixth to third in the opening corners to grab a podium.

“I had no choice but to take a few risks in race one – since it’s not easy to overtake at Croft, you really need to make the most of the first lap – and we emerged from turn two in seventh,” he said. “I established a large gap behind and was quite happy following Sutton and looking for opportunities, but then the safety car came out and from that point on, I had to keep one eye in my mirrors as well, which spoiled our momentum so I concentrated on bringing it home.

“That put us in amongst all the really quick guys in race two, while the reversed grid race as always shook everything up a bit. Starting sixth, the podium was my goal and it was brilliant to achieve that. I had a little go at Josh [Cook] into Tower early on; I’d been thinking about it for a couple of laps, but he’s pretty smart and he just let it happen before getting the cutback on the exit.

“After that, the race levelled out a bit, and I also had [Stephen] Jelley on my tail putting the pressure on, so I had to defend from him at the same time.

“We kept on pushing right to the end and overall, I was really pleased with the consistency we showed again with another three solid finishes. To score such good points and spray some champagne after a tough qualifying was a fantastic effort by the whole team, and means we end the first half of the season on a high.”