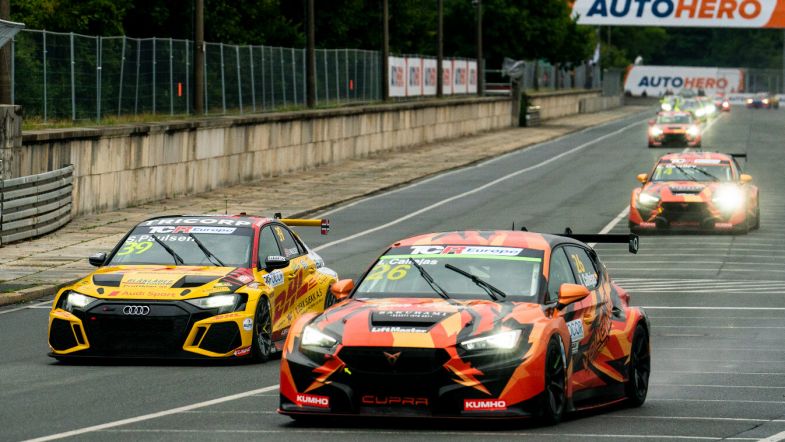 Isidro Callejas and Ruben Fernández are both confident they will be on track in TCR Europe’s second Norisring practice session after they ended the first early following a collision.

On a drying but still wet track, Callejas was exiting the pitlane and slowly navigating the turn two hairpin when Fernández’s Audi RS 3 LMS careered into the side of his Cupra Leon Competición at speed.

The impact with the slow-moving Callejas stopped Fernández from then ending up in the tyre barriers, but still gave his car a beating as the right-hand side door was bent inwards, requiring a lot of hammering by the RC2 Junior Team mechanics, whilst the front-right suspension arm had to be thoroughly examined from below once the car was returned to the paddock.

Volcano Motorsport was initially pessimistic in its assessment of the damage to Callejas’s Cupra, particularly after watching the onboard video of the incident, but after getting to work on the car their mood lifted and after also enacting panel repairs and putting on a new front end they soon felt confident of being back on track for second practice, which takes place at 14:00 local time (CET).

“And when I was exiting the pitlane the other car just got in my door and all the front was struck. Bit of disappointment with this driver, but OK.

“We hope that FP2 will be dry. But with this time in Germany, we don’t know. But we hope it.”

On the scale of the damage and whether he would be on track for FP2, he added: “For sure. The team is just amazing. They are working so hard to repair the car and I trust on them and the car will be repaired for FP2.”

Fernández also gave his take on the incident to Touring Car Times, explaining why his car was entering a heavy braking zone at such a high speed.

“The problem was that Callejas and the other guy were coming out of the pits, and then the track was drier outside [then] inside. I left some space, but on the left I put some water on the wheels and then I lost the control of the car.

“The cars were on the right. They were exiting the pits, and then I tried to stop before, then I [thought do I] pass, no pass, and then I put two wheels on the wet side and for me it was simply [gone].”

Down the pit straight the dry line is in the middle of the track, where the crown of the road is, and therefore where the water drains away from. But after the turn one kink the crowning is predominantly on one side and so the pit exit is drier than the inside line entering turn two.

“The problem is that the way [that was] dry way was inside the [line of] exit of the pitlane. Then you go outside, and then go inside [and turn]. And they were outside the pitlane, and then I don’t put the exact line on the dry track. Then I lost control,” Fernández added.

“I went to Callejas to say how I am so sorry about that. Very tricky track, very difficult with these conditions of dry-wet, dry-wet, but it was my fault.

“We changed two laps before to the dry tyres, and then we tried to put in some temperature but still I was thinking that the track was better than that really.

“It’s just the panels and something more [to sort], but we will try to fix before FP2.”