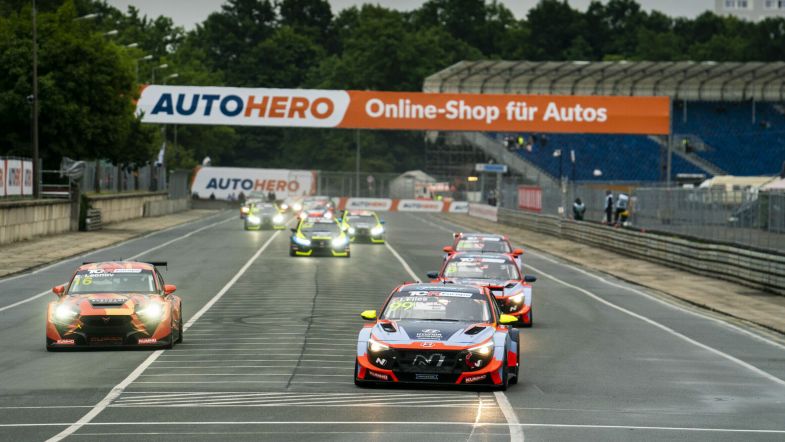 The unique experience of driving on a street circuit was an afterthought for many TCR Europe drivers during free practice day at the Norisring, as teams prioritised parts preparation on a wet track.

Rain hit the start of the first session of the day, and then came in clusters during the second, which left very little track time where there was a dry line throughout the lap. However for Saturday and Sunday’s action, it is expected to be very hot and dry.

That meant there was little to gain in nailing the set-up for a wet track, nor learning the circuit with the braking points and racing line of the wet, so many used the two sessions for development programmes instead. Target Competition’s Josh Files went even further than that, prioritising his preparation for later in the weekend so much during first practice that he had it complete and could skip second practice.

“We spent the first 20 minutes doing all of the bedding in of the parts, brakes etc,” the Hyundai Elantra N driver explained to TouringCarTimes. “So I didn’t see the point to drive in a rainy track that has oil down when the whole weekend is going to be bone dry and hot. 20 minutes before FP2 it was dry, DTM was driving in the dry, and I said ‘yeah, let’s go’. But then it rained, so I said ‘naa, forget it’.

“I didn’t drive in the wet, wet now. In FP1 I was just bedding in the brakes and stuff, so I didn’t really push. I went to slicks straight away, just on the front, bedded another set of brakes, and after I did that I just put some laps in and I went straight under the one-minute mark.

“Came in to put the full slicks on but then someone crashed so never really got a proper run. But we did what we needed to do this morning, so that’s what we counted.”

Files wasn’t the only driver to split their tyre strategy, with many combining slick and grooved tyres, and others also rotating the tyres from the rear of the car to run on the front, and vice versa, after one timed lap. That made lap times even more unrepresentative in the session, and Files thinks qualifying on Saturday morning “is going to be really interesting”.

“The track is so, so tricky. It’s very good to race near the city with the people of Nuremberg. It’s very good. Under the rain conditions, I have a good feeling with the car and good result with P2 in the second session. For today, it’s okay. Now we see if I can improve myself for the qualifying.”

Butti, who sat in first place early on in both practice sessions, was one of few who actually focused on his Friday performance and ran throughout with four grooved tyres even when the track was drying.

“For today I was focused on the wet conditions. For tomorrow, obviously have some changes with the balance of the car, the brake balance and the rear wing.”

The next TCR Europe session at the Norisring is qualifying, which starts at 11:10 CET (10:10 BST) on Saturday.