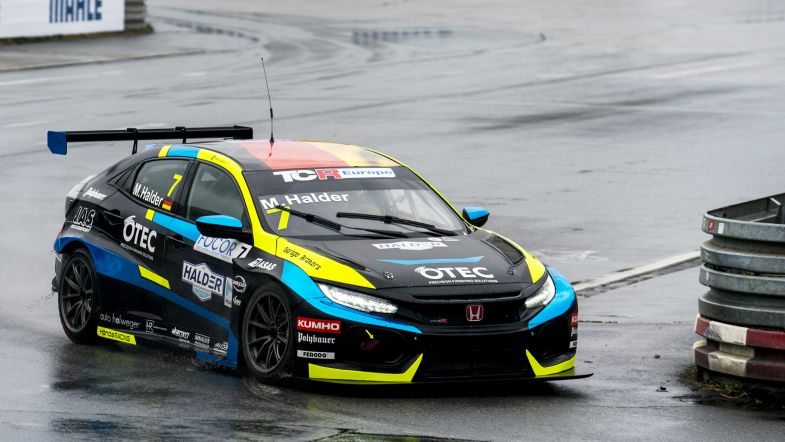 Mike Halder will start TCR Europe’s first ever race on the Norisring street circuit from pole after setting the pace in qualifying in his own Halder Motorsport-run car.

Rain and oil covering the track through the two free practice sessions on Friday, so nobody had data on what the circuit would be like to drive in fully dry conditions.

Diamond Trophy entrant Viktor Davidovski was the surprise early pacesetter as most drivers went out, set a timed lap then returned to the pits to swap around the front and rear tyres.

Davidovski’s driver coach and Comtoyou Racing team-mate Franco Girolami then took over in first place, holding the top spot until the qualifying segment went into its final 10 minutes and Halder lapped 0.035 seconds faster with the aid of a slipstream in his Honda Civic Type R TCR.

At this point drivers were embarking on their second runs, and Target Competition’s Felice Jelmini moved to the top by a slight 0.065s. There was only for a minute though, as Volcano Motorsport’s Isidro Callejas bettered him by 0.070s. Jelmini’s team-mate Josh Files then became the fastest Hyundai Elantra N driver, lapping just 0.004s slower than Callejas.

Jelmini struck back though, becoming the first driver to lap in quicker than 55 seconds. Callejas joined him in the 54s territory and Files improved in third before they ended their second runs and changed tyres again.

Halder was the first to beat Jelmini’s benchmark on the final runs, doing so by 0.005s, but once again Jelmini had more pace in hand and he ended Q1 with 0.076s in hand over Halder.

Callejas was third, and Davidovski was the only driver near the top to improve on his final lap as he jumped up the order to fourth. Points-leading team-mate Girolami was only eighth, but at the same time only 0.238s off the top and comfortably through to Q2.

Ahead of him was Evgeni Leonov, who ended his session early with a crash into the barriers that damaged the right-hand side of his Cupra León Competitición and left Volcano in a race against time to enact repairs.

Halder’s team-mate Jack Young was the final driver to make it through to the next segment by going 12th fastest, 0.424s off the pace, and his other team-mate Michelle Halder was down in 19th but less than eight tenths of a second slower than her brother.

It was a super close fight between Halder and Jelmini again in Q2. Halder was ahead first, then Jelmini got ahead by being first into the 54s, before Halder responded moments later.

Jelmini’s own response was the fastest lap of the weekend yet, and Files and then Davidovski demoted Halder to fourth. He left it until his final run and the final two minutes to improve again, and a 54.753s lap put him on pole by 0.031 seconds over Jelmini.

Once again few drivers improved on their very last lap, but Davidovski was an exception and he qualified an impressive third, just 0.069s off pole.

Files and Mat’o Homola, also driving a Hyundai but for Janik Motorsport, were fourth and fifth and less than two tenths back. Callejas was sixth, and Girolami was again only eighth.

But as Klim Gavrilov was 10th fastest it means Girolami’s championship lead still grows ahead of the first race of the weekend, which takes place later on Saturday at 17:40 CET local time (16:40 BST).

Volcano did manage to get Leonov out on track before the end of Q2, but he did not have enough time to set a flying lap.