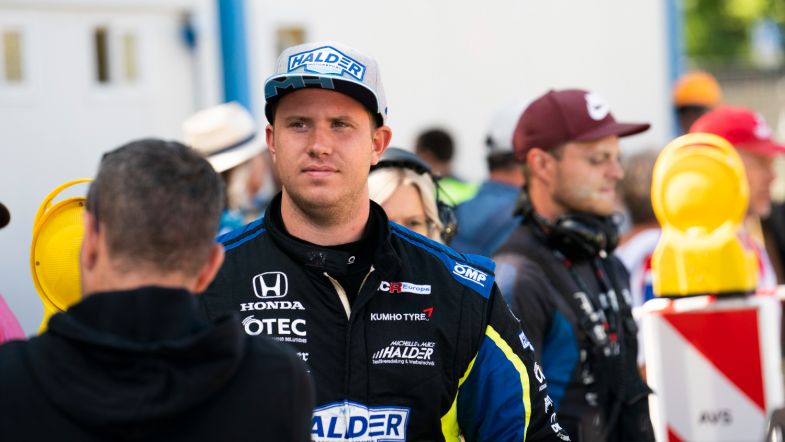 Mike Halder has voiced his competitive concern about his Honda Civic Type R TCR’s straight line speed compared to its rivals, despite taking the TCR Europe pole and victory on Saturday at the Norisring.

Before the day’s race, the Halder Motorsport driver told TouringCarTimes how with no references with what was needed for dry conditions on the track he had chosen a set-up that meant “the balance was very good for qualifying so I had a great feeling in the car and right from the beginning was fast”.

However he also noted he was “10kph slower than Audi” down the straights and was not confident he could convert his second pole of the season into a first win. He was able to achieve the feat, only briefly losing the lead before the first braking zone on the opening lap, but when he spoke to TouringCarTimes afterwards he had the same thoughts on his mind.

“You saw it, that was crazy,” he said. “The other cars are on the straights so much faster, I think they need to change the Balance of Performance for the straights because in sector two I got the gap between me and the second place. But it doesn’t matter if it was a Hyundai or a Cupra, they closed the gaps on the straights so quick and I’m lucky that we have here a street circuit, that we have walls and not so good possibilities to overtake, so on other tracks I think I can’t fight against the others because the straightline speed was so much different.

“But in the end I’m very happy for the whole team to win here in my home race. All the sponsors are here, so a very nice feeling.”

There were several drivers who had the pace to pass Halder, but not necessarily the opportunity to as they continually squabbled over the podium places behind him.

“The problem [leading] is every time you are at the braking zone, you look in the mirror and have a look what the other guys do because always they are fighting. And maybe when they have a too late braking point, they catch you out,” Halder added.

“So every time you have one eye in the mirror and have a look what the other guys behind you do. At the end with Josh Files behind me, he’s a very experienced driver and I know him also from TCR Germany so the fight was very good, and also congrats to Josh as he did a really good job and had also really good pace, he was faster than I was over one lap. So I was lucky to open the gap in sector two.”

“Tomorrow I’m P10 on the starting grid, I think it’s [going to be] much more difficult than today. But we will see. I will give my best and hopefully we can gain some positions.”

Halder not only has recent experience now of winning from the front, but also from 10th on the grid as in last weekend’s TCR Denmark round at Jyllandsringen he won the reversed grid race.

“Denmark was a really nice weekend with two wins and a pole position. And the race two from 10th to first was also very happy and funny to drive, so I came with a good background to the next event here.”