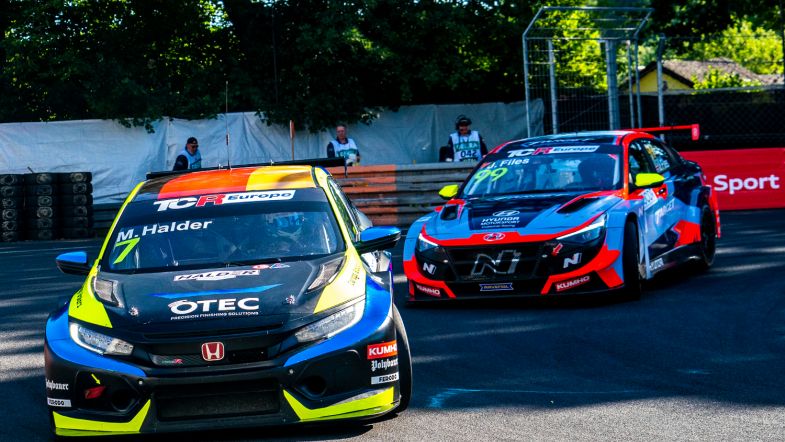 Target Competition’s Josh Files has praised TCR Europe’s inclusion of Norisring in its calendar after being part of a race-long battle for win in the series’ first race on the street circuit.

The short Nuremberg circuit has hosted the DTM for many years, but as that series switched to GT3 sportscars as its technical template last year it meant there was no more professional touring car series visiting the circuit.

That changed when TCR Europe’s promoter Paulo Ferreira negotiated to bring his series onto the event bill for 2022, and it proved popular with spectators and drivers on Saturday.

TouringCarTimes asked Files what he made of the drama of the first race, which he finished second in, and he replied: “Where do we start? I think it was a touring car race.

“In fairness you could make moves [at the turn two hairpin] but you’ll end up crashing. So from that side it was pretty fair. Everyone sort of gave each other a bit of space. There was some nudging, banging, but nothing too drastic. I think it just was really entertaining and a good touring car race and I’m personally thankful for Paolo and the promoters to get us on the Norisring event because I think it’s a fantastic event, many fans.

“It’s brilliant TV, great track, great atmosphere, and I hope that TCR Europe can continue coming back because it makes for great touring car racing.”

Files was one of few drivers who made an overtaking spot of the turn seven hairpin in addition to turn two, but drivers were often more cautious there to make sure they could make optimum use of the slipstream down the pit straight and on to turn two.

There was a lot of action late on in the race as Files piled the pressure on eventual winner Mike Halder, and everyone had been able to save their tyres during a prolonged safety car period that ran almost half of the race’s duration.

“I would have preferred no safety car, to be honest,” Files said. “We had a great car, I’m very strong on the brakes. We just miss low-down power [for slow corners], and that’s our issue. Our car today, with the set-up we have, is probably one of the quickest out there. And I think if we can manage to be in front, we’d be alright. Just we’re fast in the wrong places.

“But, just to finish, I’d like to say my team-mate Felice [Jelmini] to my left here who did a fantastic job today in qualifying.”

Jelmini qualified second and briefly took the lead from Halder at turn on the opening lap but then missed his braking point at turn two and dropped down the order before recovering to ninth.

“He went for it, why not, and he deserved to win today,” concluded Files.