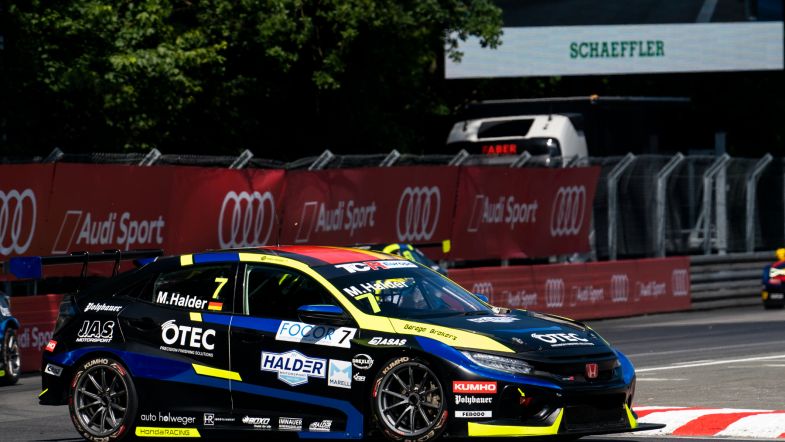 Mike Halder holds them off to win from pole at Norisring

Mike Halder belied his own doubts to win TCR Europe’s first ever race at the Norisring from pole.

The Halder Motorsport driver was convinced his Honda Civic Type R would be at such a straightline speed disadvantage against the newer TCR cars that he would not be able to hold on to his position at the front, but the German ended up almost leading from start to finish.

It was only between the first and second corners on the opening lap that somebody else led the way, as Target Competition’s Felice Jelmini powered past Halder before the turn one kink in his Hyundai Elantra N but then didn’t hit the brakes until he got to the apex of the slow turn two hairpin and as a result he went off and rejoined way out of the top 10.

Halder reclaimed his place at the front as he went around the hairpin, then did not have to worry about an attack from behind for 10 laps as the safety car came out to clear the Hyundai of Aggressive Team Italia’s Pepe Oriola from turn two after he went into a gap that quickly closed on the first lap and ended his race balanced on the kerbs with a broken car, and to move the Audi RS 3 LMS II of Élite Motorsport’s Marco Butti following his contact with Evgeny Leonov.

When racing did resume it was clear that Target’s Josh Files, Comtoyou Racing pair Franco Girolami and Viktor Davidovski and Volcano Motorsport’s Isidro Callejas all had cars with pace capable of getting ahead of Halder. However they spent the coming laps predominantly only fighting with each other.

Files was initially second and had to defend from Davidovski, who locked up and fell behind Callejas. He quickly took the challenge to Files, but took almost two laps before Files left enough of an opening on the inside of a corner that he could dive into it.

At the same time Girolami passed his team-mate for fourth, and he then went to attack Files but instead ended up giving him a hit at turn two.

Eventually Callejas could focus purely on the driver ahead rather than those behind, but his attempt at the lead going into turn two failed as he went too deep and dropped back behind Files.

He reclaimed second a lap later, and Girolami had another desperate go at Files by cutting turn two, locking up and still not getting ahead.

Callejas also had a turn two lock-up, as he had a second go at Halder, but this time he got the car turned in on time and the order remained the same.

An extra element joined the lead battle in the final laps, as Lema Racing’s Giacomo Ghermandi had pitted to repair front-end damage to his Cupra León Competición and had rejoined the track ahead of the fight at the front. Blue flags were waved but it took a while for Ghermandi to get out of the way, and in that time Files passed Callejas for second by going down the inside of the turn seven hairpin and then Girolami also cleared him with better momentum through the turn eight bend that ends the lap.

Davidovski demoted Callejas one spot further with a bit of contact at turn two on the next lap, then on the penultimate tour – once Ghermandi finally slowed significantly to get out of the way – Files pushed Halder’s rear wheels off the ground as he bumped him through turn two. There still wasn’t room to pass, even when Halder ran deep at the same corner on the last lap, and he held on to win by 0.473 seconds.

Girolami extended his points lead in the absence of team-mate Tom Coronel by finishing third, ad Davidovski took victory in the Diamond Trophy classification with fourth place as Callejas got briefly held up by Ghermandi and ended up having to spend the final two laps holding off Mat’o Homola, John Filippi and Coronel’s stand-in Stian Paulsen.

After his lap one off, Jelmini recovered to finish ninth, and Halder Motorsport’s Jack Young completed the top 10.