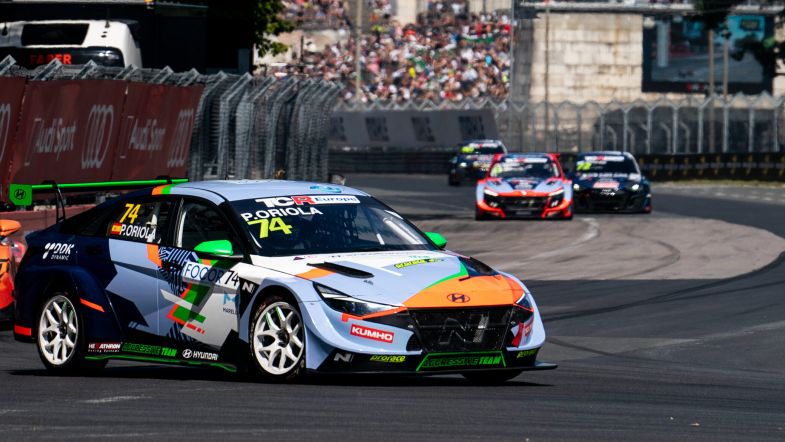 Pepe Oriola may have ensured he can finish the TCR Europe season by signing with Team Aggressive Italia, but the Spaniard has little hope for his involvement in this weekend’s races at the Norisring.

For the first three rounds Oriola drove for Brutal Fish Racing Team in a Honda Civic Type R, but the team pulled the plug on its programme in the championship and Oriola was left searching for a seat.

At his new team he drives a Hyundai Elantra N, a car he feels is at a disadvantage around the short Norisring street circuit and which contributed to him qualifying only 18th – his worst qualifying result in a TCR event of any kind since 2018.

“The car feels good [in the dry], but obviously we are missing some straightline speed,” he said after qualifying, which was the first session of the weekend to take place on a dry track.

“I mean this track, 95% of the time, it comes from the straight line speed. So we have to see what’s going on with the car and stuff, but at the end I’m happy to be here. We knew this could happen, we haven’t tested the car before, the team is new here as well, so step-by-step. But I think the problem is we are missing some power.”

Although the wide roads of Nuremberg can lead to overtaking around the Norisring, and races in other categories have shown that back-to-front performances are possible with the amount of chaos that can occur, Oriola doesn’t hold hope that he will end the day strongly.

“Well for me I’m going to do the races because I’m a professional, but starting from P18 the only thing that can happen is to have a big crash and damage the car,” Oriola said. “Naa, nothing [can be gained in position]. I will try to take it as a test, to try to learn the car, to get used to the car, and that’s it. We go to the Nürburgring [in August] and start from there because for sure here it’s going to be really hard.”

There are two TCR Europe races taking place at the Norisring, and the first is at 17:40 local time on Saturday.