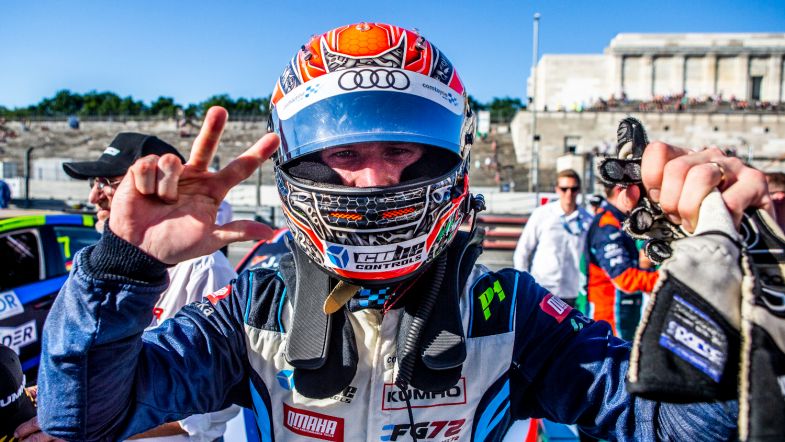 Comtoyou Racing’s Franco Girolami extended his TCR Europe points lead with victory in the second race on the Norisring.

Volcano Motorsport’s Klim Gavrilov and Halder Motorsport’s Jack Young started in front of Girolami on the reversed grid, which was actually pushed back by two rows on the asphalt due to issues with seeing the starting gantry from the first painted grid slots.

Young’s older Honda was outdragged by the cars around him on the run to the turn two hairpin, and Girolami got by and through the corner before chaos occurred as Sébastien Loeb Racing’s John Filippi got a light tap from Mat’o Homola then was spun around by Viktor Davidovski.

Filippi was able to get going again quickly though so racing wasn’t interrupted and Girolami was able to attack Gavrilov when they returned to the corner on the next lap.

He went into the rear of Gavrilov’s Cupra León Competición at the apex of the hairpin, then tried to get alongside at the chicane that followed but doubled waved yellow flags were out and so he had to stay behind the leader.

Moments later the safety car was summoned as the rear-right tyre had flown off Giacomo Ghermandi’s car and he had stopped on the pit straight.

The restart didn’t occur until the eight lap of the short street circuit, and Girolami watched Gavrilov from behind for two laps to see where he was weakest before he decided to take him on at the circuit’s second hairpin for the lead.

The move worked, with Gavrilov leaning too much on his front tyres, and from thereon Girolami pulled away to eventually finish with 4.238 seconds in hand after 26 laps.

Gavrilov had to work hard for the rest of the race to hold on to second place, with Josh Files, Isidro Callejas, Jack Young and Davidovski all running behind him in a line.

Files had made his way up to third with a potentially questionable move approaching turn two on the opening lap where he ran inside of the white line to get past Davidovski, just as he was involving himself with Filippi, and rear-ended Young into a half-spin that he was able to save from turning all the way around.

Callejas initially preoccupied himself with defending from Felice Jelmini before attacking his Target Competition team-mate Files, but they had contact two laps in a row and the second time sent Jelmini into the barriers and therefore retirement.

It took some time before Callejas was able to attempt a move, due to Files being exceptionally strong on the brakes in his Hyundai Elantra N, and he only got his chance on lap 19 after Files had failed in his own attempted move on Gavrilov.

Callejas’s attempt resulted in him hitting the rear of Files, and the Volcano driver was shown the black-and-white flag for driving standards. He briefly toned down his attacks, freeing Files to focus again on going for second place.

On lap 24 he chose the outside line at turn one as Gavrilov braked early, but the Russian then went deep into the corner and that stopped Files from turning in and taking advantage.

It left room for Callejas again, and on the penultimate lap he made a late lunge and ended up in the rear of Files. The trio just could not get past each other, and it a was a similar story just behind in the battle for fifth.

After Jelmini’s exit, Young led Jáchym Galáš and Davidovski in that fight for position. Davidovski passed Galáš on lap 12, then started pressuring Young. After three laps of constant attacks he finally got by Young but missed his turn-in point and had to get aggressive to remain ahead. Galáš soon started hassling Young too but left it late until he went to pass the Honda Civic Type R driver.

Starting the final lap, Galáš utilised the slipstream from Young but was too close and went into his rear as soon as Young touched the brakes.

Young had to save his car from a spin, while Galáš’s Hyundai also got tail-happy and he had to go hard on the brakes to make it to turn two. He went deep into the corner and Young got back by, along with his team boss Mike Halder too.

The next TCR Europe round is at the Nürburgring on August 26-28.