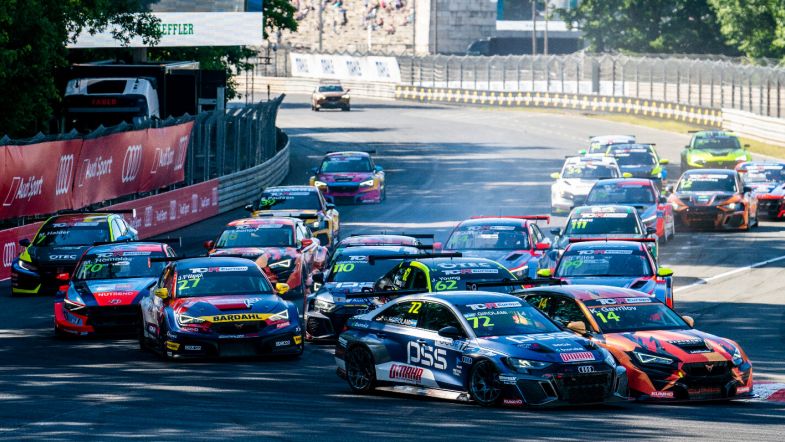 Gavrilov: The battles were “crazy” to earn Norisring podium

Klim Gavrilov picked up his second TCR Europe reversed grid race podium of 2022 at the Norisring in an entertaining race to watch, but the Volcano Motorsport driver found the action stressful to be part of.

“It was, quite,” Gavrilov laughed when TouringCarTimes put it to him that Sunday’s encounter was a proper touring race. “It was extremely hard.

“I think from the perspective from viewers and fans it was ‘oo, amazing fight’, but from my perspective it was ‘oh damn it I’m so tired of that’ because I had some problems with the brakes, I couldn’t brake as late as the Hyundai and Audis could. In the corners I was really good, but in the braking zones I struggled a bit.”

It was noticeable that Gavrilov was harder on his front tyres early in the race as he held back Franco Girolami, and once he conceded the lead to the Audi driver he then had a long queue of cars wanting to pass but was able to keep them all at bay for the race’s duration.

“We will try to solve this [brake] problem. It wasn’t as bad as I may be saying about it, but it felt bad. But from the video I guess it’s not that bad. We’ll try to solve it, but the battles were like crazy. ‘No way anyone is passing me!’ [I thought], but Girolami he was just too fast.”

Girolami’s second podium means he is fourth in the standings, just eight points off the runner-up, and he was impressed by the pace his Cupra León Competitición provided him with over the Norisring weekend.

“Actually it was really good. I struggled a bit in the qualifying, but besides that in the first race [12th place was like the best what I could do because Jack Young had some problems with the pace and in the first race I was just trying to overtake him but Norisring is not the place where you can really easily overtake somebody.”

Remarkably Gavrilov’s worst result of the season was a blessing in disguise as it put him on the reversed grid pole for the next race.

“I just got stuck in the first race behind Jack, and second race here I got a good start and then Girolami was just faster because he uses Audi and they have really good straightline speed because of the aerodynamics. So he could overtake, and almost nothing I could do with that.”

Despite the strong results, Gavrilov was unsure if he wanted to return to the Norisring in 2023 when TouringCarTimes asked him.

“Dammit, I don’t know,” he said, pondering the question. “I like this track but, I don’t know, when you’re watching races on street circuit tracks and if the car has no DRS sometimes it’s really boring.

“When we’re watching World Touring Car Cup it’s really like close [on street circuits], but there is not a lot of overtakes. And it’s what we saw here as well. It’s a really cool track, the battles are great, but it’s really hard to overtake. You’re waiting almost for a mistake from your opponent, and that’s how you overtake. Maybe like one street circuit in the calendar is really good, but going every street circuit is not the best idea.”

Gavrilov’s team-mate Isidro Callejas sits one place and two points ahead of him in the standings, and finished fifth in both Norisring races. After race two he received a reprimand for his driving standards, having been involved in incidents with several drivers.

He was one of many drivers to be investigated by the stewards, but at the time of writing RC2 Junior Team’s Rubén Fernández was the only driver to receive a penalty as he will be docked five places on the grid of the first race at the Nürburgring, which takes place on August 27.