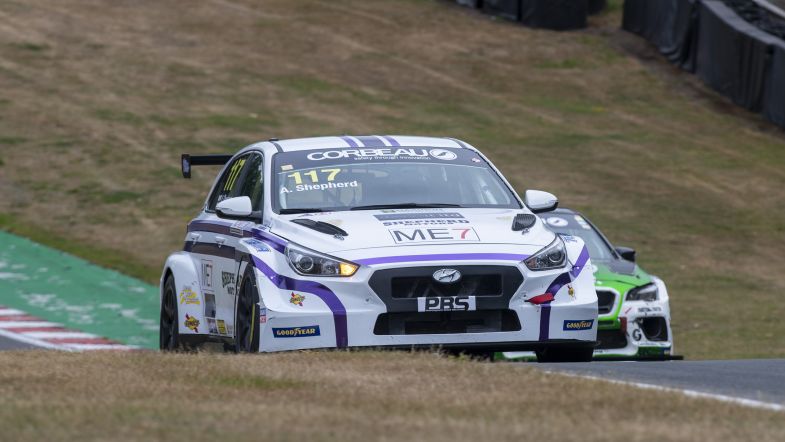 Area Motorsport’s Adam Shepherd emerged as the quickest driver in TCR UK free practice on the series’ second visit to Oulton Park, edging out Alex Ley by a quarter of a second.

Having already raced at the Cheshire circuit this season, drivers did not need much time to get dialled back into the track as action began, with points leader Max Hart initially setting the fastest time with a 1:30.843.

That time was quickly beaten by double champion Lewis Kent in his Essex and Kent Hyundai Veloster N TCR to the tune of over half a second, with Isaac Smith’s Race Car Consultants Volkswagen Golf GTI TCR second.

Kent then improved again as the track grip began to increase, with Brad Hutchinson now into second ahead of Callum Newsham’s Power Maxed Racing Cupra TCR; the latter was almost a full second off the pace of Kent.

Entering the final minutes, there was a flurry of action and improvements. Shepherd got a clear lap in his Hyundai with two minutes of the session left and punched in the fastest time of the morning as Ley also getting to within six-hundredths of a second.

Hart improved his time but not his position and remained third, with Restart Racing’s Chris Smiley moving up to fifth.

But there was a final improvement from Shepherd, who moved out to an extended margin over Ley, while Power Maxed Racing’s Jac Constable put in a last-minute effort to finish third ahead of Hart and Lewis Kent.

Behind Smiley in sixth was Hutchison, with race two winner of the earlier Oulton Park round Jess Hawkins eighth quickest.

Matthew Wilson and Bradley Kent rounded out the top 10.

Next up for TCR UK is qualifying which is due to start at 11:10 BST.