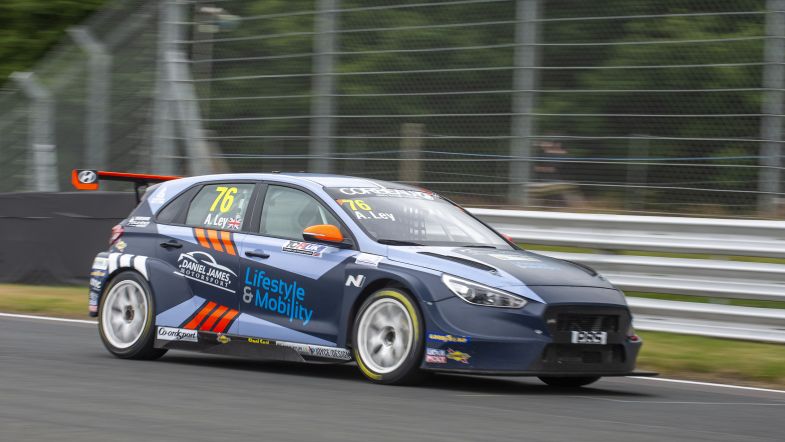 The Daniel James Motorsport Hyundai i30 N TCR driver inherited pole position after top qualifier Max Hart was sent to the back of the grid following a technical infringement, and led every lap.

He beat Adam Shepherd by just over a second, while Isaac Smith moved into the points lead with the final step on the podium.

The drama started just 10 minutes before the start after TCR UK organisers elected to demote Hart to the back of the grid – as well as a subsequent 10-second delay when the lights went out – following an overboost during qualifying.

Jamsport team principal Jamie Going said that Hart’s Hyundai i30 N TCR had exceeded the mandated boost by ‘around 0.0145 bar, momentarily’ adding that the performance gain had been minimal.

The penalty elevated Ley to pole position, and the teenager maintained his advantage over Adam Shepherd into Old Hall for the first time, with Callum Newsham third.

Shepherd was quickly all over the back of Ley on the run towards the Island Hairpin, while Newsham’s race took a turn for the worse as his Cupra suddenly slowed on exit.

Having started making his way through the field, Hart’s race then ended as his Hyundai ground to a halt with apparent mechanical woes exiting Hislops with just under 17 minutes of the race remaining. The erstwhile points leader pulled off between Druids and Lodge corner, bringing out the safety car as a result.

At the restart, Ley made a strong getaway to head Shepherd, with Isaac Smith – who had moved into third at the expense of Newsham – and Chris Smiley up next.

Further back, Jac Constable tried to make a move around the outside of amie Tonks at Cascades, but dipped a wheel onto the grass on entry and slewed across the infield, dropping a chunk of places and rejoining on the other side of the track at Knickerbrook.

Darelle Wilson also fell out of the race with an issue in his Opel Astra.

Meanwhile, out in front, Ley established a lead of eight tenths over Shepherd, who in turn was just half a second clear of Smith behind.

That leading trio quickly became a quintet as Chris Smiley and Tonks joined the party in the closing five minutes. The latter’s Cupra appeared the quicker car versus Smiley’s Honda Civic Type R but struggled to find the right overtaking opportunity, with the BTCC regular hanging on to maintain fourth at the flag.

Shepherd’s pace increased in the final laps, taking half a second out of Ley’s lead, but Ley was largely untroubled on his way to a second victory of the season, by 1.255s.

Smith completed the podium in third, a further second in arrears of Shepherd while Andy Wilmot was sixth behind the scrapping Smiley and Tonks.

Last year’s TCR UK runner-up Bruce Winfield was seventh, ahead of Ant Whorton-Eales and Brad Hutchison. After starting only 15th on the grid following an incident in qualifying, Lewis Kent recovered to 10th, crucially securing pole position for the second race, due to take place at 16:50 BST.