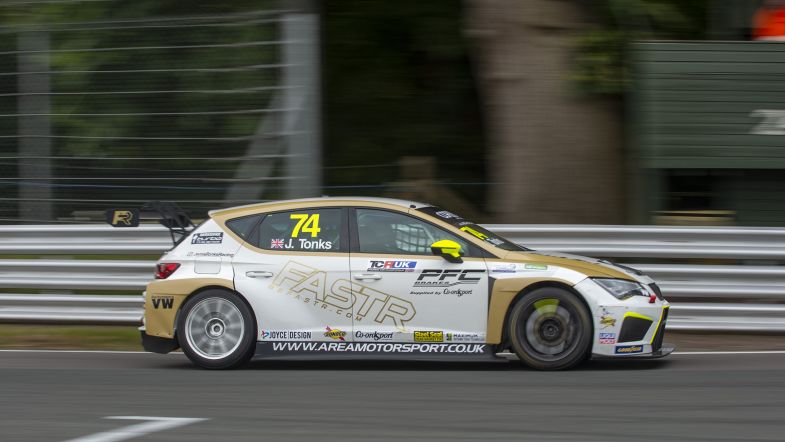 Tonks came through from sixth on the grid to prevail in an entertaining encounter, moving into the lead with a crucial overtake on Bruce Winfield at mid-distance.

He then held his nerve to open up a healthy margin over Winfield by the flag, while Race Car Consultants’ Isaac Smith produced a charging drive from eighth on the grid to extend his points lead with third place.

A post-race penalty for Ant Whorton-Eales meant that Matthew Wilson inherited the reversed grid pole, but a poor getaway off the line gave Kent the lead into Old Hall for the first time.

The Hyundai Veloster N TCR maintained a slender margin over the fast-starting Winfield, who in had to keep Tonks at bay in third as the field jostled for position early doors.

Kent looked comfortable in the second and third sectors of the lap, but fell into the clutches of the chasing Winfield out of Lodge and into Old Hall. That proved Kent’s undoing as his car slowed exiting Lodge with 11 minutes remaining.

Winfield pulled alongside and seized the initiative into the first turn, with Kent fighting back around the outside of Cascades. That allowed Tonks to get in on the action and the Cupra snuck through into second approaching Island.

Tonks then turned his attention to Winfield for the lead, which he eventually got on the entry to Knickerbrook. The bunching up resulted in slight contact between the pair, with Kent also giving Tonks a bump from behind. The resulting traffic jam meant Chris Smiley moved up to fourth.

The biggest mover in the second half of the race was Smith, however, and the Volkswagen Golf GTI TCR proved to be a rocket ship down the straight towards Island. As Kent struggled with the handling of his car, Smith made a decisive move around the outside of Smiley at the hairpin to grab fourth, before out-dragging Kent on the exit of the corner a few laps later.

Smith’s progress was significant as his third place at the finish means he now holds a healthy points lead, as Kent was demoted to 11th after the flag after receiving a 10-second penalty for track limits infringements.

Suffering even worse was Hart, whose weekend spectacularly fell apart after being stripped of pole position earlier in the day. The Irishman failed to finish either of the races, his second lasting only slightly longer than the first.

Off the podium was Smiley, followed by Adam Shepherd and Andy Wilmot, while Wilson recovered from his slow start to finish seventh.

Race 1 winner Alex Ley was eighth in his Hyundai, ahead of Jac Constable and Darelle Wilson.

The next TCR UK round of the year will take place at Castle Combe on Saturday 6th August.