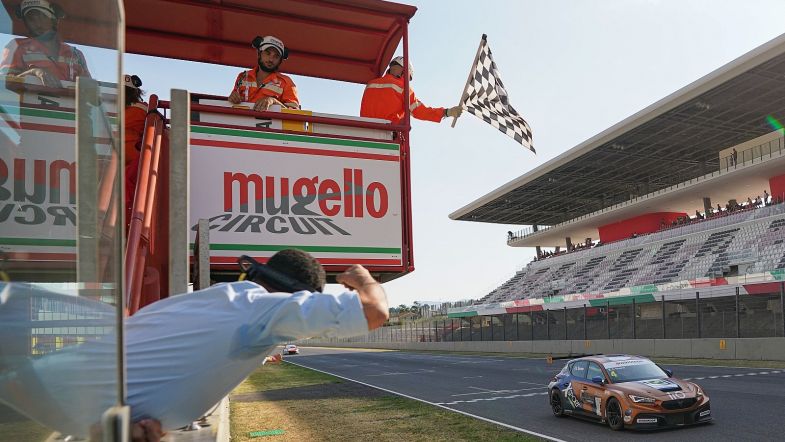 Salvatore Tavano extended his lead at the head of the TCR Italy standings after securing victory in the opening race of the weekend at Mugello.

The Scuderia del Girasole driver had qualified on the second row of the grid for race one, with Niels Langeveld heading an all-Hyundai front row ahead of
Cesare Brusa.

Langeveld held the lead at the start of the race with Tavano going around the outside of Brusa into turn one to grab second spot, with the Cupra briefly drawing alongside Langeveld before he retained his advantage.

The Dutch racer quickly started to pull away at the front of the field and had established a lead of well over seven seconds before his Elantra N TCR suddenly slowed with a front-left puncture with little over ten minutes of the race left to run.

Langeveld’s issue – which resulted in him finishing back in 17th spot – handed Tavano the lead and he was able to make the most of a squabble behind between Brusa, Denis Babuin, Kevin Ceccon and Michele Imberti for second spot.

As Tavano eased to victory, Ceccon forced his way past Babuin to take third spot – running the Audi wide and allowing Imberti to follow him through – before heaping pressure on Brusa for second spot.

Ceccon would finally make the pressure pay when he got ahead of the older Hyundai but his charge from sixth on the grid would be undone by a penalty for the contact with Babuin which dropped him back down to fifth in the result.

That meant Brusa instead inherited second spot, with Imberti rounding out the podium in third spot after an impressive run from tenth on the grid.

Babuin took fourth from the penalised Ceccin, with the top six being completed by Felipe Fernandez.

Tavano’s third win of the season means his lead in the points is now 52 points over Ceccon, with Langeveld slipping down to third.