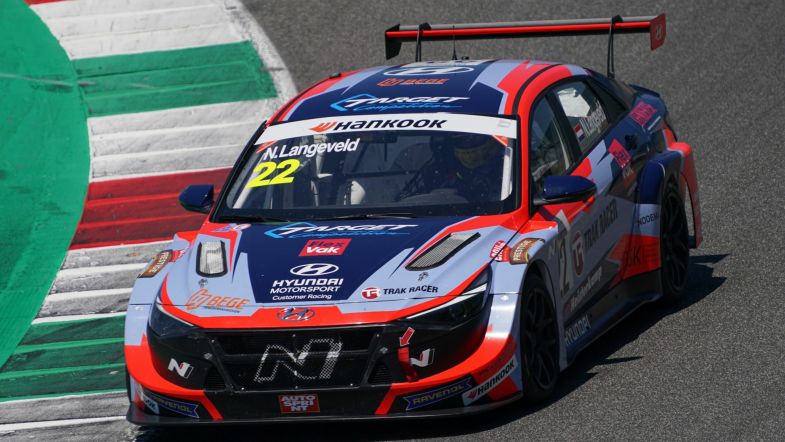 The Target Competition driver had qualified on pole but was only able to finish 17th on Saturday after a puncture whilst leading, and he lined up eighth for Sunday’s race.

Carlo Tamburini and Domiano Reduzzi filled the front row for race two, with Kevin Ceccon in third, Denis Babuin in fourth and race one winner and points leader Salvatore Tavano in fifth.

It was Babuin who led by the end of the opening lap, as he passed Tamburini at the last corner, with Reduzzi shuffled down to third and Tavano being one of several drivers to pass Ceccon to be in fourth. Reduzzi got back into second by passing Tamburini on lap two, while Langeveld cut through to fourth with Ceccon on his tail while Tavano was knocked back to sixth.

Babuin started to pull away from the rest of the field by some margin, and Reduzzi settled into second place while Langeveld got himself into a podium position after several corners of side-by-side action with Tamburini on lap four.

The order at the front then went unchanged until a mid-race safety car period, required to remove Francesco Savoia’s stricken car at turn eleven, and that wiped out Babuin’s lead of over three seconds.

He once again raced away on the restart several laps later, as Langeveld dived down the inside of Reduzzi at the San Donato hairpin to get second and also give a chance to those behind to attack. Ceccon, now in fourth, couldn’t get past but then he was gifted two positions.

Reduzzi was the first to drop down the order, as he drifted into the gravel at one corner and managed to maintain control of his Hyundai Elantra N but at the expense of falling to eighth.

Then a few laps later Babuin, who had built up a lead of three seconds again, suddenly slowed through the final corner and down the pit straight. Langeveld and Ceccon passed before he seemed to get up to speed again, and what had been a dominant run by the Bolza Corse driver now turned into a chase of Langeveld and Team Aggressive Italia’s Ceccon for the final laps.

The trio ran closely but there was no change of position, and Langeveld claimed victory by 0.945s, with Babuin only 1.172s behind.

Tavano finished fourth to minimise Langeveld and Ceccon’s bite into his points advantage, ahead of Langeveld’s team-mate Cesare Brusa and Ettore Carminati.

There was a big battle for seventh that went on for much of the race either side of the safety car interruption, and Rubén Fernàndez came out on top by a tiny margin in front of Reduzzi. Tamburini had been involved in that battle but dropped back in ninth by the end, and Felipe Fernàndez also lost time at the end in 10th.

In addition to Savoia, Rodolfo Massaro and Rammo Antti had their races end in the gravel, while Michele Imberti was handed a two-minute penalty on the opening lap and retired their car shortly after.

Tavano heads the standings on 270 points while Langeveld is second on 224 and Ceccon third on 192.

The next TCR Italy race will take place at Imola on September 10-11.