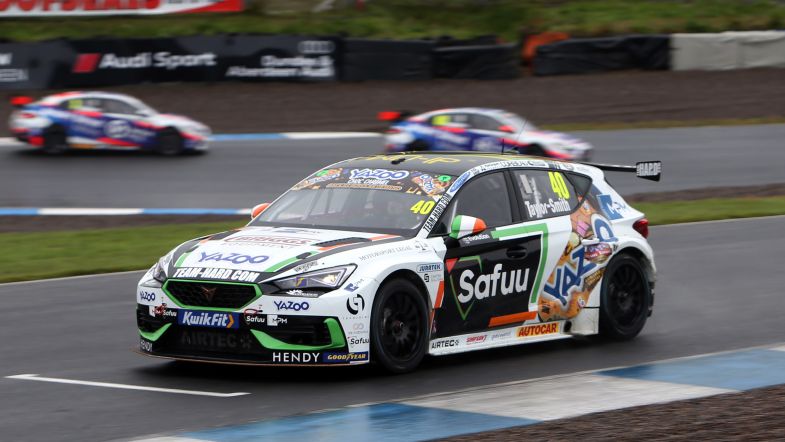 Aron Taylor-Smith topped the times for Team HARD on a drying circuit as the BTCC season resumed with the opening practice session of the weekend at Knockhill.

Although all cars would start the session on wet rubber, Taylor-Smith was one of a number of drivers who elected to bolt on a set of dry tyres towards the end and it allowed the Cupra racer to vault up the order to secure top spot on the times by nearly half a second ahead of team-mate Bobby Thompson.

Thompson was another driver to switch to slicks but had showed top ten pace on the wet rubber, with Michael Crees also vaulting up the order on dry tyres to take third.

Crees had earlier caused the second of two red flags when he suffered a spin at turn one, with Will Powell having earlier taken a trip into the gravel to lead to the first stoppage.

Josh Cook had spent most of the session on top of the times in his BTC Racing Honda but would be demoted back to fourth thanks to the late improvements, with Rory Butcher and Jake Hill rounding out the top six.

Points leader Tom Ingram would end the session back in eleventh spot, albeit only as a result of the late slick runs knocking him down the order.