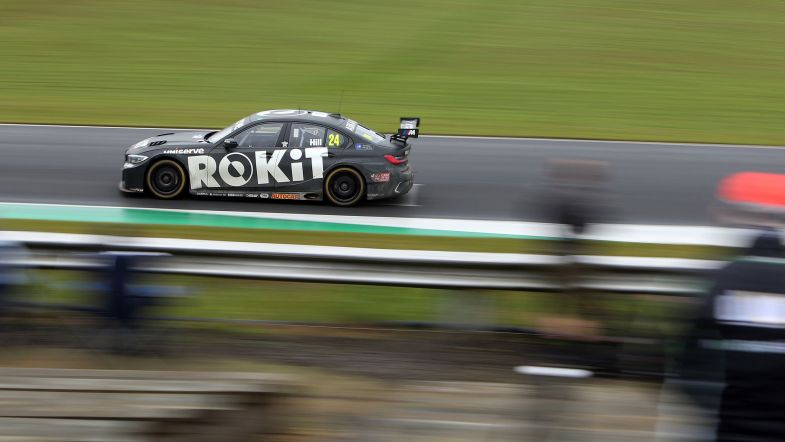 Jake Hill produced a fine lap in qualifying to snare pole position ahead of the sixth meeting of the BTCC season at Knockhill.

Hill was the man to beat on the first runs in the session as he set the first sub-51s laps of the weekend to grab provisional pole in his BMW ahead of team-mate Colin Turkington and the Hyundai of points leader Tom Ingram.

That was despite Ingram running without any additional hybrid power because of the fact he heads the championship standings, with Rory Butcher and Aiden Moffat just behind.

After returning to the pits for a tyre change, defending champion Ash Sutton slotted into second spot shortly after the half-way stage of the session with a lap just 0.074s down on Hill’s benchmark, with the likes of Josh Cook, Gordon Shedden and Dan Lloyd amongst those with work to do outside the top ten.

Adam Morgan was the next big improver as he powered the Ciceley Motorsport BMW up into third, with Ingram suffering a wild moment as he looked to better his time; his car bouncing over the grass on the exit of the chicane.

Hill improved his time to extend his advantage over Sutton as the session headed into the final ten minutes, with the action halted with just under five minutes on the clock when Nic Hamilton suffered a spin at the hairpin.

Hill’s advantage at the front was two-tenths of a second over Sutton with a Morgan a further tenth back, with Turkington, Ingram and Butcher holding the top six spots as the field prepared to head back out for a five minute run to the flag.

Despite the best efforts of his rivals, Hill’s time would prove to be out of reach as he grabbed pole in the BMW ahead of Sutton, who looked to be on course for an improved time before he ran wide at the hairpin.

Turkington improved on his final lap to take third spot from Morgan, with Stephen Jelley and George Gamble both also setting quicker times as they moved up into the top six.

Butcher and points leader Ingram would slip back to seventh and eighth as a result, with the top ten rounded out by Aiden Moffat and Dan Cammish.

A tough session for Gordon Shedden and Josh Cook saw them back in 13th and 14th places, with Ricky Collard in 15th having earlier paced FP2.

Double Croft winner Dan Lloyd will also have work to do having qualified back in 22nd.