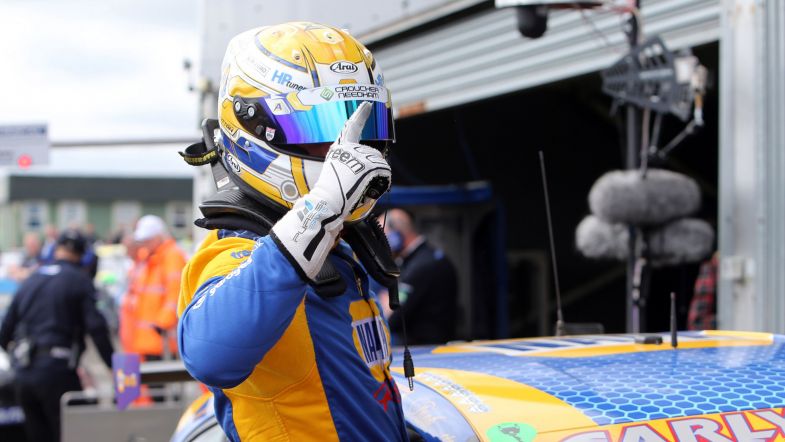 Ash Sutton produced a battling performance on track to hold off the challenge of Jake Hill and grab his first win of the BTCC season in race two at Knockhill.

From pole, Hill held the lead at the start ahead of Sutton, with Colin Turkington and Tom Ingram slotting into third and fourth behind – the latter having dived down the inside of George Gamble into McIntyres before nipping ahead of Stephen Jelley at the hairpin.

After an early caution following a clash between Jason Plato and Will Powell, Hill held station at the front before a mistake at the chicane saw him dip a wheel into the gravel, which enabled Sutton to nip ahead into the lead of the race on the run up to Clark’s.

Hill would close back in on the Focus ahead and Sutton was forced to take a defensive line more than once to keep the BMW behind until Hill made a second error at the chicane which saw him drop to third.

That promoted Turkington up into second spot before he made a mistake of his own at Duffus Dip to cede position.

That gave Hill the chance to once again chase down Sutton but despite his best efforts, the defending champion held on to grab the win, with Hill and Turkington rounding out the podium.

Ingram would challenge Turkington early on before dropping away from the lead fight to end in fourth, with Gordon Shedden taking fifth having battled his way ahead of Jelley’s BMW in the late stages.

Both Rory Butcher and George Gamble would also pass the BMW before the finish, with Gamble having slipped down the order early on when he ran wide at Clarks.

Dan Cammish and Tom Chilton rounded out the top ten, with Josh Cook again struggling in the BTC Racing Honda to finish 13th – dropping him to third in the championship standings with Turkington moving up into second.