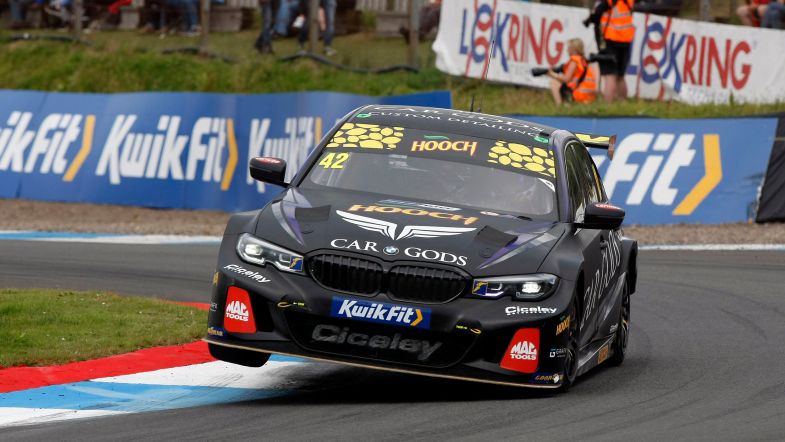 George Gamble scampered away from the battling pack behind to grab his maiden BTCC win in the final race of the weekend at Knockhill.

Gamble had started the race from the reverse grid pole and held the lead off the start ahead of Rory Butcher, but there was drama behind as Tom Ingram and Gordon Shedden tangled at McIntyres and dropped down the order, with Shedden then tagging Dan Cammish as he recovered – putting the Ford out of the race.

A small error at Clarks early on was the only time Gamble looked at risk, and he edged away from Butcher as he came under pressure from Jake Hill – who had run behind team-mate Colin Turkington before being released to attack the Toyota ahead.

Butcher would fend off Hill’s challenge until he ran out of hybrid power, and Hill was able to take full advantage to sweep ahead late on – with Butcher then forced to fight hard to keep Turkington at bay.

The Scot held on to grab a home podium ahead of Turkington and Ash Sutton, who joined the party late on in the NAPA Racing Ford, with Shedden rounding out the top six.

Stephen Jelley would take seven ahead of Josh Cook as he grabbed his only top ten finish of the weekend, with Tom Chilton and Aiden Moffat rounding out the top ten.

Ingram would recover from his lap one off to finish twelfth, but has now dropped off the lead of the championship, with Turkington taking top spot at the conclusion of the weekend.