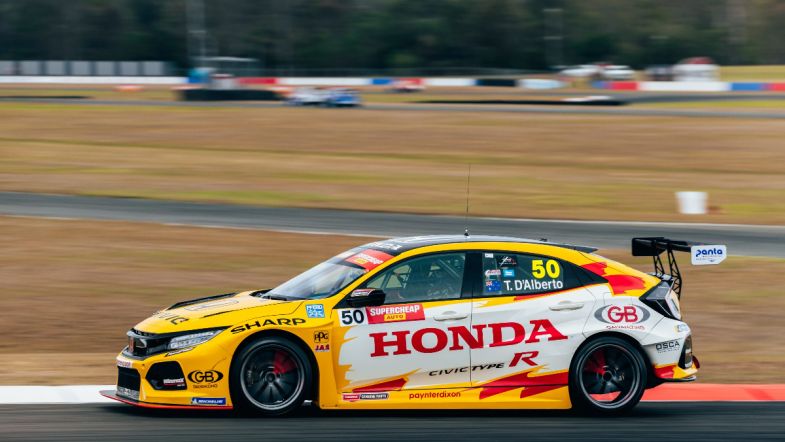 Tony D’Alberto claimed his first pole in TCR Australia at Queensland Raceway since the championship’s inaugural round back in May 2019.

The points leader, who is still yet to actually win a race in two-and-a-half seasons of competing, was fastest in both Q1 and Q2 by a small margin to claim two points and add to the pole position he achieved in a Honda Civic Type R TCR at Sydney Motorsport Park over three years ago

It took a while for the first segment of qualifying at Queensland to really get going, with Luke King setting the first flying lap four-and-a-half minutes in. He was almost instantly beaten by D’Alberto, who set a 1:13.208 and then made successive improvements on his next two laps to reach sub-1:13 territory. His fastest lap, a 1:12:813, was set with just under nine of the 15 minutes remaining and thereon few drivers improved.

All of D’Alberto’s rivals at the top of the standings failed to make it through, with Dylan O’Keeffe 15th, Josh Buchan 12th and Jordan Cox 16th. Unable to set a flying lap during Q1 was Braydan Willmington, who will start 21st in the first race.

Q2 was also settle early in D’Alberto’s favour, with Aaron Cameron setting the early pace. D’Alberto was briefly top before Brown set a 1:12:730, but he responded with a 1:12.5223 lap that would be good enough for pole.

Zac Soutar bagged himself a front row spot with just over three minutes remaining, going 0.1128s slower than D’Alberto and admitting there was no way he could beat the poleman despite the small gap in pace between their two Hondas.

Brown couldn’t improve on his best lap but qualified third in his Audi RS 3 LMS, 0.0486s slower than Soutar, while Bailey Sweeny and Jay Hanson were split by 0.0211s in fourth and fifth.

Caruso was a second off the pace and qualified 10th.

The first race of the weekend starts at 16:15 AEST today.