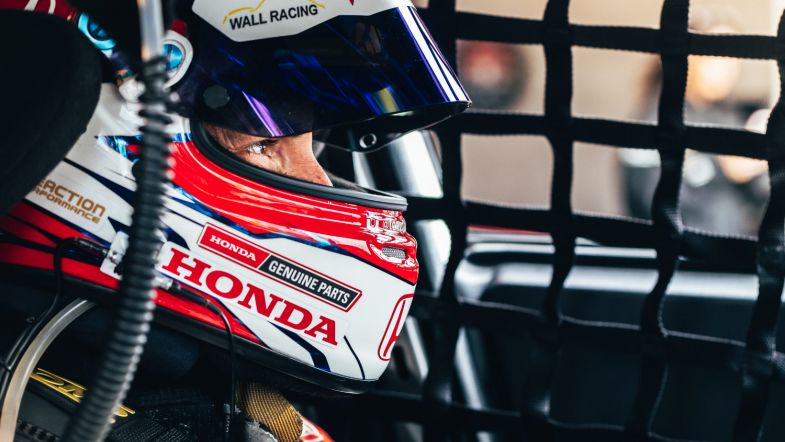 Tony D’Alberto ended a 46-race wait for his first TCR Australia win in the opening race of the weekend at Queensland Raceway.

The Wall Racing driver took pole for the series’ first ever race in May 2019 and finished it in second, but had only matched that result twice since. However he started the Queensland weekend with pole, and converted that into a maiden win to extend his title lead to 50 points.

D’Alberto was chased off the line by fellow front row man and Honda Civic Type R TCR driver Zac Soutar, while the drivers on the row behind were slower to start and it allowed the top two to race away.

Will Brown was initially third but made a mistake at the third corner and ran way off track, and Bailey Sweeny who was in fourth wasn’t able to benefit as two moments of contact sent him spinning at high speed but remarkably allowed him to maintain momentum and return to track in 10th while Brown dropped to 15th.

They were able to regain places as there was further drama, starting on lap three as James Moffat headed to the pits with persisting boost pressure issues and had an ECU change before rejoining the race.

On lap seven of the scheduled 20 there was then a big crash involving Nathan Morcom and Ben Bargwanna that left both in the gravel and required a lengthy safety car interruption that ran to the end of lap 12 and shortened the race by two laps.

In a four-car fight, Bargwanna had made side-on-side contact and dropped from fifth to ninth in just a few seconds before rising back up to sixth as he approached the second hairpin.

As it turned out his foot had gone to the floor when trying to brake in his Peugeot 308 TCR, and reaching the apex of the corner he bounced off a kerb and into Morcom’s Hyundai i30 N. It sent both into retirement, with Bargwanna’s car also suffering a front-left puncture as he went off.

Jay Hanson, Aaron Cameron and Luke King sat just behind the top two when racing resumed, and Cameron had an off on the restart lap but it didn’t cost him a place. This time Hanson had the pace to stay with the Hondas up front, but wasn’t faster than them and the order remained static with D’Alberto staying mistake-free to bring home his first victory by 0.920 seconds.

A further half-second back in third was Hanson, and Cameron dropped four second in the last few laps but just held on to fourth ahead of early spinner Sweeny.

King got passed and finished sixth ahead of D’Alberto’s closest title rival Jordan Cox, who had started 16th, and the fighting trio of Michael Clemente, Brown and Josh Buchan. Like Cox, Buchan is a title contender and could only qualify 12th but finished 10th.

Lachlan Mineeff headed Michael Caruso and Dylan O’Keeffe in a photo finish for 11th place, with Ian McDougall the last finisher of the race.

Kody Garland wasn’t able to start as powersteering issues inflicted his Renault Mégane R.S on the way to the grid.

The second race of the weekend starts at 13:10 AEST.