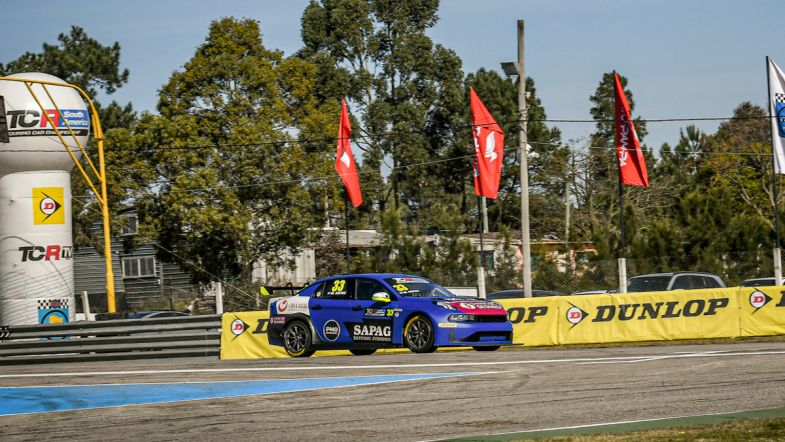 The Lynk & Co driver passed reversed grid polesitter Fabio Casagrande at the rolling start, and Pedro Aizza and Enrique Maglione came from fifth and sixth on the grid to also got by him on lap one before the safety car was summoned after Rodrigo Aramendia’s Alfa Romeo Giulietta was spun into the gravel and his team-mate Fernando Rama did the same in avoidance but he was able to get going again.

Racing resumed on lap three and Sapag romped away while Aizza had a few laps of Maglione in his mirrors before he too built up a gap in second place.

Maglione held on to third until the start of the penultimate lap, when the charging Raphael Reis came through for a podium finish and another bite into Fabricio Pezzini’s points lead.

Reis had started ninth but moved up to seventh when the two Alfas went off, then took sixth place from fellow title chaser and race one winner Juan Ángel Rosso on lap seven of 25. He spent the next five laps hunting down Franco Farina, but his attempted pass on the Peugeot 308 driver at the last corner resulted in Alceu Feldmann getting by him instead.

He reclaimed the spot approaching the final corner on the next lap, only for Feldman to brake later and get back alongside. Feldman had the line to stay ahead going into the first corner, and he then set about chasing Farina.

On lap 16 he repealed Reis’ attempt at a pass, but there wasn’t enough room and he ended up banging doors with Farina. It forced both deep and Reis went through. In clean air Reis was able to pull away and he approached Maglione on lap 22.

He thought better of going for a pass straight away, and instead did the dummy at the last corner a lap later to draw alongside on the exit and then take third place into the penultimate lap.

Farina had fallen to eighth by the finish, behind Pezzini, Feldmann and Rosso. Pezzini now leads Reis by nine points, with Rosso a further 11 behind.

Casagrande’s decline was even worse than Farina’s, as he finished almost 28 seconds behind in 10th place, while Adalberto Baptista failed to finish when the engine in his Audi RS 3 LMS appeared to expire mid-race.

The next TCR South America race is scheduled for August 27-28 at Termas De Rio Hondo.