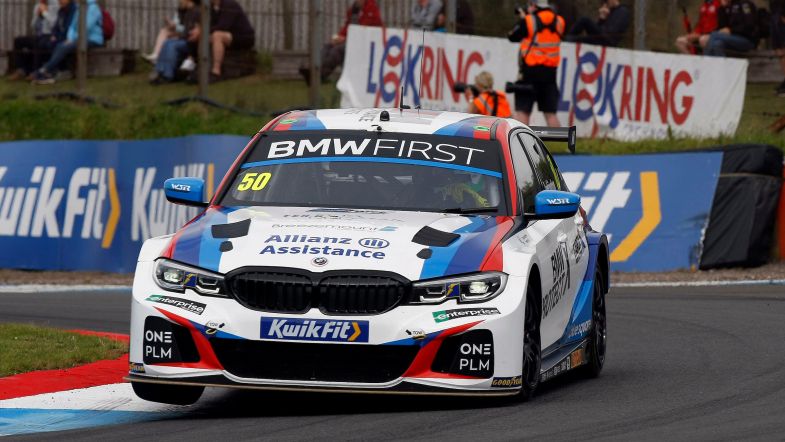 The British Touring Car Championship title fight rolls into Snetterton this weekend for what is set to be one a hot weekend of action – quite literally – with Colin Turkington looking to cement his position as the man to beat in the standings.

The Northern Irishman hit the front last time out at Knockhill and takes a slender advantage over Tom Ingram into the Norfolk race weekend; a weekend that is set to see him take part in his 500th race in the series.

Turkington has a strong record at the Norfolk circuit, most notably in the last two seasons when he has only finished off the podium once, and has scored three wins in six starts.

Although he will carry no hybrid power into the weekend, Turkington remains confident about his chances although he admits that the weather conditions will make things far from easy on track.

“It will be more important than ever to have the BMW exactly how I want for qualifying as I won’t have any hybrid power,” he said. “This is the penalty for our Knockhill success, so we have to stay focused on delivering our best.

“Historically, we’ve had great pace and results around Snetterton, and I’ll obviously be doing all I can to continue that trend. The heat in the car is set to be a challenge again this weekend, and we’ll be working hard in those intense temperatures six times over the two days, so physical fitness and personal care will play a factor.”

Ingram’s clash with Gordon Shedden in race three at Knockhill saw him slip back to second in the standings, but that means the EXCELR8 driver will now have a small amount of extra hybrid to take into qualifying and the opening race of the weekend.

The former Independents’ champion grabbed the first win for the Hyundai at Snetterton last season and will be chasing a repeat this time around to maintain his title challenge, with the i30 Fastback N having shown strong pace during the two-day Goodyear tyre test last month.

Coming up the rails is defending champion Ash Sutton, who opened his win account for the campaign with a fine drive in the second race of the weekend at Knockhill.

Sutton will be keen to maintain the pace shown in the Snetterton test, where his Ford Focus topped the times ahead of team-mate Dan Cammish – although Cammish was able to set his fast time on the current race tyre rather than the soft tyre Sutton was using as part of a Goodyear programme.

“It was nice to kick-start the second half of the season in a nice way at Knockhill, it’s a track I like and we managed to get the car in a good place,” he said. “We learnt things good and bad at the Snetterton tyre test so we’ll just make sure we avoid the bad and, ultimately, we need to look at it more with an eye to what Dan was doing on the race tyre as he was quickest.

“When we did our ‘standard’ tyre run, if you like, we weren’t a million miles away so hopefully it can be a good weekend.”

Jake Hill is also coming up on the rails following his own Knockhill victory and sits in fourth spot in his ROKiT-backed BMW, with Josh Cook having slipped back to fifth having struggled for straight line pace.

A tough weekend could lie ahead for the former points leader given the long straights at Snetterton, although team-mate Jason Plato was able to make it into the top ten during the test.

Scottish pair Rory Butcher and Gordon Shedden find themselves squabbling over sixth in the points and will both expect to be in the mix for trophies during the weekend ahead, as will Dan Lloyd in eighth as he seeks to bounce back from a disastrous showing at Knockhill – where he failed to score a point.

Adam Morgan was another driver to suffer in Scotland and has Stephen Jelley and Cammish close behind in the fight for the top ten, whilst George Gamble and Dan Rowbottom are only a handful of points further back.