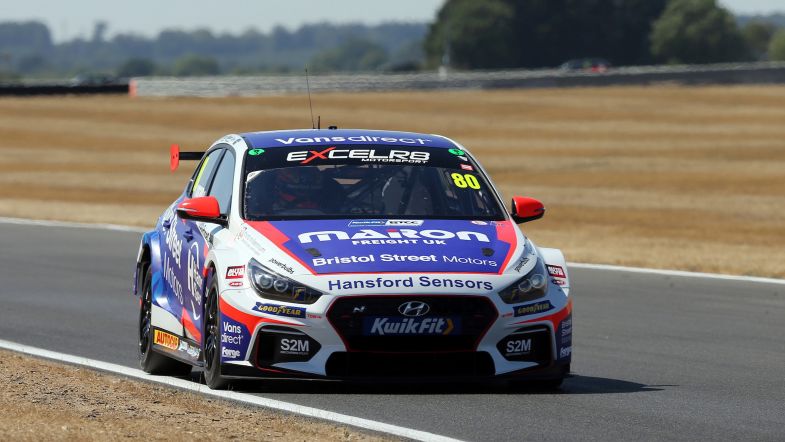 Tom Ingram topped the times in the opening BTCC practice session at Snetterton, with drivers given their first opportunity to sample the sweltering conditions that are set to be a feature of the weekend.

Ingram was one of only two drivers to head the session, with a best time of 1:55.302s coming just after the mid-way point to put the EXCELR8 driver at the head of the field.

The Hyundai would end up just 0.097s clear of the BMW of Jake Hill, with the leading duo having a comfortable gap of more than half a second over anyone else.

Third quickest was current championship leader Colin Turkington, who made light of his lack of hybrid to set a solid time in the #500 BMW – renumbered this weekend ahead of his 500th start in the series on Sunday.

Daniel Lloyd, looking to bounce back from his Knockhill disaster, was fourth quickest ahead of the two Speedworks Toyotas – with Rory Butcher heading team-mate Ricky Collard.

Adam Morgan and Stephen Jelley followed behind, with Tom Chilton in ninth the last driver to lap within a second of the quickest lap. Gordon Shedden rounded out the top ten as the quickest of the Hondas.

Dan Cammish and Ash Sutton were back in 14th and 15th in the two NAPA Racing Fords despite being quickest in the two-day test at the circuit last month, whilst Josh Cook was down in 18th place and slowest in all three speed traps in his BTC Racing Honda.