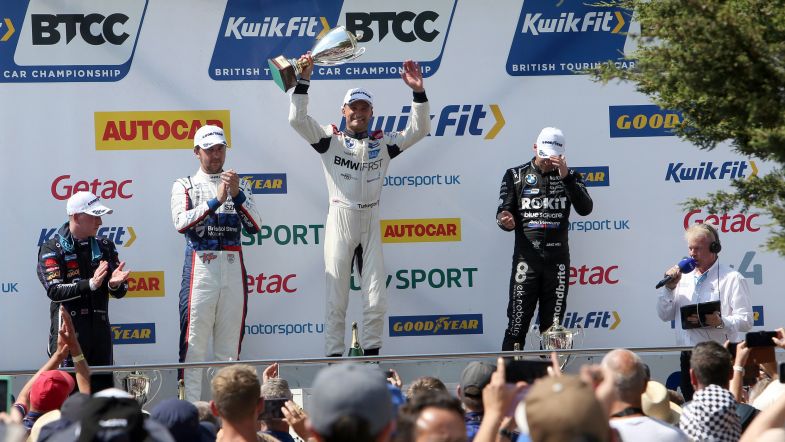 Colin Turkington saw off the challenge of team-mate Jake Hill to secure a second win of weekend at Snetterton and strengthen his position at the head of the BTCC standings.

Turkington once again started from pole and although he held the lead from Hill going into turn one, the ROKiT-backed car drew ahead on the exit of Wilson to give Hill the inside line going down to Palmer.

The two cars ran side-by-side on the straight down to Agostini where Turkington held on around the outside, and then again through both Hamilton and Oggies.

Only as the pair went through the right hander at Williams to head onto the back straight was Turkington able to hold on to his lead, with Hill forced to settle in behind.

From that point on, the pair edged away from the Hyundai of Tom Ingram and although Hill would close onto the rear of his team-mate after a caution period to recover the stricken Honda of Gordon Shedden, the Northern Irishman was able to make it two wins from two.

Hill followed home in second spot, with the top five in the race being the same as in race one – with Ingram rounding out the podium from the BMWs of Adam Morgan and Stephen Jelley.

Behind, Ricky Collard produced a strong run in the Toyota to take sixth spot, with the Speedworks racer in the heart of a huge squabble on lap one that saw both Dan Cammish and Ash Sutton drop down the order.

Collard would fight ahead of Dan Rowbottom’s Honda early on before finding a way ahead of Jason Plato towards the end, with Plato and Rowbottom following him over the line to round out the top eight.

Sutton would recover to ninth after pulling identical moves on Dan Lloyd and Ash Hand at the hairpin on consecutive laps, with Hand rounding out the top ten. Sutton will start the reverse grid finale from pole.

Further down the order, Josh Cook again struggled as he took 15th place, with his car now undergoing an engine change ahead of race three.