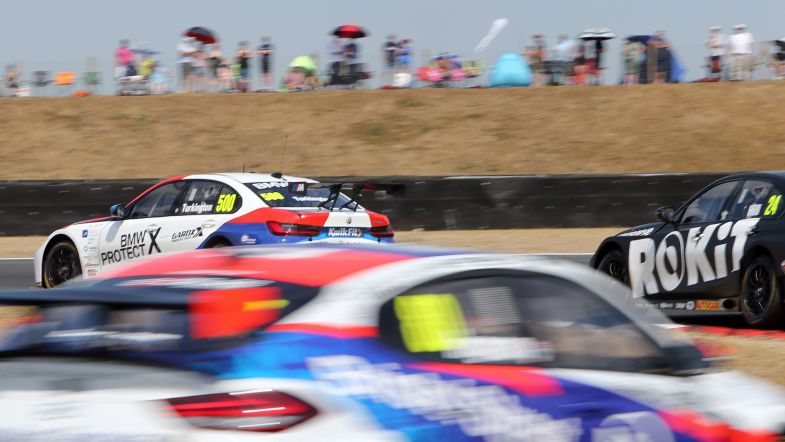 Colin Turkington converted pole position into victory with a lights-to-flag run in the opening BTCC race of the weekend at Snetterton.

The Northern Irishman had headed a BMW 1-2 on the grid ahead of Jake Hill and he was able to keep ahead of his team-mate on the run to turn one for the first time.

Turkington had a slender lead before the safety car was deployed to allow the recovery of Michael Crees’s Vauxhall Astra after he ground to a halt on the infield but controlled the restart to retain his position at the front.

Even when the safety car came out a second time following a clash between Josh Cook and Aiden Moffat at turn one that saw Moffat’s Infiniti left stranded on the grass with broken suspension, Turkington was able to control things from the front as he took victory to extend his impressive recent record at the Norfolk circuit.

Hill followed him home to take second spot, with Tom Ingram rounding out the podium in his Hyundai. Ingram had a nibble at Hill on the opening lap but ultimately didn’t have the pace to match the BMWs, and would end up racing with an eye on the mirror to keep Adam Morgan behind late on.

Morgan had battled ahead of Stephen Jelley on the opening lap with a solid move at Agostini and the pair held station throughout ahead of Jason Plato’s BTC Racing Honda.

Plato had expected to struggle given the straight line issues for the car but used all of his experience to keep a gaggle of cars behind, headed by the Focus of Dan Cammish.

Cammish fought his way ahead of Dan Rowbottom at the end of the third lap, with Rowbottom them having the second NAPA Racing car of Ash Sutton all over his tail.

Sutton tried to get ahead on the run to the line but fell just short of taking eighth spot, with the top ten rounded out by Gordon Shedden – who nipped ahead of Ricky Collard’s Toyota when he ran wide onto the grass on lap eight.

Further down the order, Cook had made up eight spots on lap one to move into the points but would gradually be overhauled by his rivals behind, eventually taking the flag back in 20th place.

Rory Butcher came from 26th on the grid to score points in P15, whilst George Gamble was forced to start from the back after an issue on the green flag lap and came through to 16th.