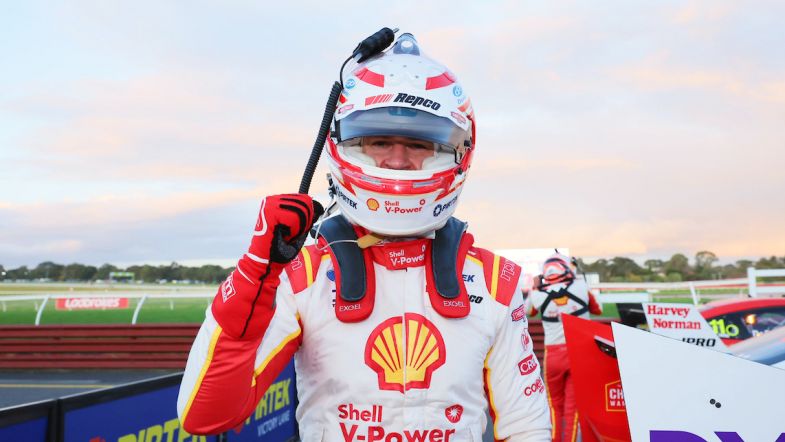 Will Davison celebrated his new contract with Dick Johnson Racing with a comfortable victory in the opening Supercars race of the weekend at Sandown.

Davison had topped the times in qualifying but faced a nervous wait to discover if he would start from pole after crossing the yellow line early at pit exit when heading out to start his lap in the top ten shootout.

A seventh pole – set at record-breaking pace – was confirmed after an investigation had taken place, although Davison was hit with a $500 fine.

Elsewhere, Cam Waters found himself down outside the top ten, with David Reynolds at the back having been blocked on his lap in Q1.

Having retained his pole, Davison rocketed away when the lights went out to lead the way into turn one, with van Gisbergen forced to defend to keep Brown at bay.

Further back however, Triple Eight team-mate Broc Feeney was the man in the wars on lap one – dropping to the back of the field when he was tipped into a spin at turn nine, resulting in Andre Heimgartner being hit with a 15 second penalty after tapping the rear of the Triple Eight Holden.

Davison quickly created a small gap over van Gisbergen at the front, with Brown keeping the championship leader on his toes in the fight second and De Pasquale rounding out the top four.

De Pasquale was the first of the leading runners to put at the end of the twelfth lap, with James Courtney following him in from sixth – the pair then returning to the track on fresh tyres and in clear air.

Brown and van Gisbergen were next to come in on lap 17 and Brown was the man t lose out as he he rejoined the circuit behind De Pasquale – who had pumped in some quick laps after his stop to force Triple Eight to react.

Davison then came in a lap later from the lead and rejoined having retained his position at the front, with the DJR driver ultimately extending his advantage to nearly four seconds by the time the pit stops had cycled through and the whole field had made their mandatory stops.

As van Gisbergen was initially forced to keep an eye on De Pasquale behind, Davison was able to extend his advantage at the front to secure a comfortable victory.

Van Gisbergen would manage to shake off De Pasquale as the advantage of fresher tyres proved to be key to the Triple Eight driver in the closing stages, with De Pasquale having to settle for the final step on the podium.

The big fight in the final laps would be over fourth, with Brown coming under huge pressure from a charging Waters.

Waters worked his way up the order to sit on Brown’s tail, with the pair making contact on the penultimate lap as Waters tried to find a way through.

Despite his best efforts, Waters was unable to get ahead as Brown took fourth spot, with Waters forced to settle for fifth spot and James Courtney taking sixth.

Scott Pye, Mark Winterbottom, Thomas Randle and Chaz Mostert were all part of the train of cars behind the fight for fourth spot as they rounded out the top ten, with the fastest lap for Feeney showing what might have been for the youngster as he recovered through to 14th from his lap one drama.

Reynolds meanwhile also showed his pace as he managed to come from the back of the grid to twelfth.

All 25 drivers made it to the finish, although Lee Holdsworth lost time in the pits when his car failed to get away after its tyre change and Chris Pither was forced into a second stop due to a deflating tyre.