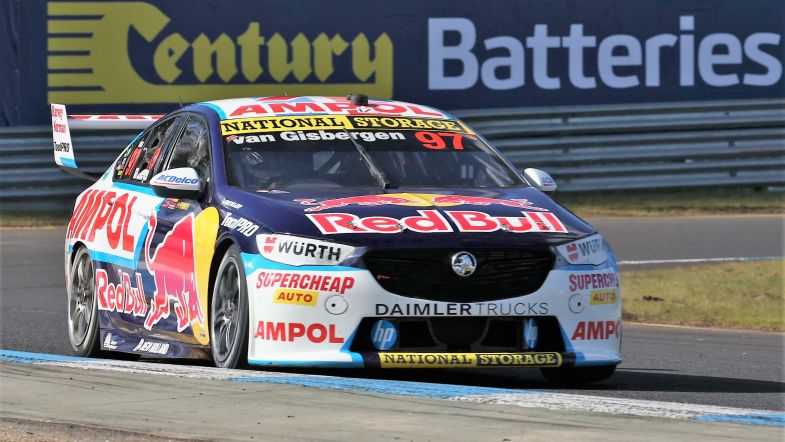 Shane van Gisbergen extended his advantage in the Supercars standings to 500 points after securing victory in the second and third races of the weekend at Sandown.

Qualifying for the two Sunday races had van Gisbergen and Will Davison share the two pole positions – with the qualifying lap record being broken for the second day in succession.

Davison’s pole in particular was impressive, with a small electrical fire in the first session having left him down outside the top ten on the grid.

From pole, van Gisbergen retained the lead when race two kicked off to lead the field down into turn one for the first time but there was a huge battle for second, with fellow front-row starter Cam Waters coming under attack from behind.

Chaz Mostert and Broc Feeney both managed to get ahead of the Monster Energy-backed car as Waters was forced wide and slipped to fourth.

Van Gisbergen was able to see off the challenge of Mostert in the early laps before starting to ease away at the front, and he would go long compared to his rivals behind on the first stint before making his mandatory change.

Rejoining ahead of Mostert on the road, the Triple Eight car pulled away from Mostert on fresher tyres to secure victory, having seen Davison end his winning run the previous day.

Feeney’s bid for third was undone by a slow stop that dropped him down the order, with Will Brown instead benefitting from fresher tyres towards the end to come out on top of a fight with David Reynolds for third, with Scott Pye and Andre Heimgartner rounding out the top six.

Feeney would recover to P10 at the finish, although Davison’s bid to recover from his qualifying issue was ended by a penalty for a pit lane infringement when his car was dropped from the jacks too early.

Davison and van Gisbergen rocketed away at the start of the finale to immediately gap the pack behind, with de Pasquale moving up to third and Mostert, Waters and Feeney rounding out the top six.

Van Gisbergen made his bid for the lead on lap two, with the pair running side-by-side for a number of turns before the points leader made a move stick to hit the front at the final corner.

Davison tried to fight back immediately but his bid to get the cut-back coming onto the start/finish straight only saw him make contact with de Pasquale – who was forced to dive into the pits.

Having held off Davison’s attack on the following lap, van Gisbergen managed to take the slenderest of leads at the front through the early stages before the pit stops kicked off, with Mostert the first of the front-running pack to come in on lap ten.

As he looked to benefit from the undercut, the fight for the lead intensified as Davison closed onto the rear of van Gisbergen, with the pair breaking away from Waters as he proved to be unable to match their pace.

Van Gisbergen pitted at the end of lap 17 and rejoined just ahead of Mostert on the road, showing how he had gained time from his early stop, with Davison electing to go long before pitting coming in on lap 23 as one of the final two drivers to make their mandatory change.

The Mustang rejoined between van Gisbergen and Mostert, with the former taking advantage of the pair behind squabbling to secure a two second advantage at the front.

Davison was able to retain his second spot and set off after van Gisbergen, with Mostert instead coming under pressure for third from Waters. Waters pushed hard to find a way ahead but then locked up and ran wide at the Esses – dropping down to tenth after a trip through the gravel.

Mostert’s hold on third wouldn’t last too much longer however, with Feeney closing onto the rear of the WAU car before sweeping ahead on fresher tyres into turn one on lap 33.

Out front, Davison would start to close on van Gisbergen ahead but the points leader had enough of a margin to hold on for a 70th career win by just under half a second, with Feeney taking third ahead of Mostert and Mark Winterbotton, with Tim Slade rounding out the top six.