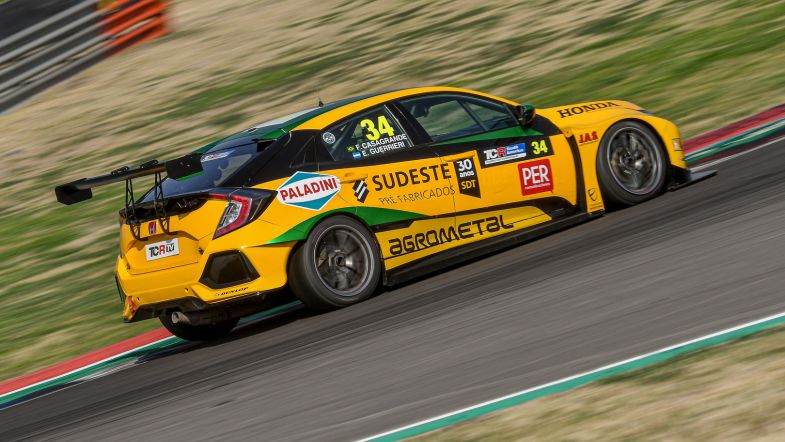 Fabio Casagrande and Esteban Guerrieri won an eventful TCR South America endurance race at Termas de Río Hondo in Argentina, while heartbreak hit Honda colleagues Ignacio Montenegro and Néstor Girolami who were forced to retire from the lead on the penultimate lap.

The Lynk & Co duo of José Manuel Sapag and Santiago Urrutia started from pole position but lost the lead early on following contact with the Cupra duo of Raphael Reis and Bernardo Llaver, resulting in a puncture for both cars – dropping to the back of the field.

The new Toyota Corolla TCR with drivers Jorge Barrio and Thiago Camilo ran as high as fifth position early on in its race debut, before retiring on the tenth lap due to a technical issue.

The two swapped position several times during the last five minutes of the race, before Feldmann went hard into the side of Azcona after being passed, pushing the Hyundai sideways across the gravel at high speed.

This handed second place to Casagrande while Feldmann dropped to third and Azcona fourth.

And what seemed to be an easy victory for Montenegro turned into disaster when the Honda suddenly slowed down on the penultimate lap, with WTCR driver Girolami watching in disbelief from the pits. Montenegro stopped on track with a technical issued, dropping down to 14th position.

This handed the lead and victory to rival Honda drivers Casagrande/Guerrieri, winning the race by seven seconds over the Cupra duo of Feldmann/Matías Milla and just below nine seconds ahead of Azcona/Pedro Aizza of Scuderia Chiarelli.

The next TCR South America race take place at Buenos Aires on September 17-18.