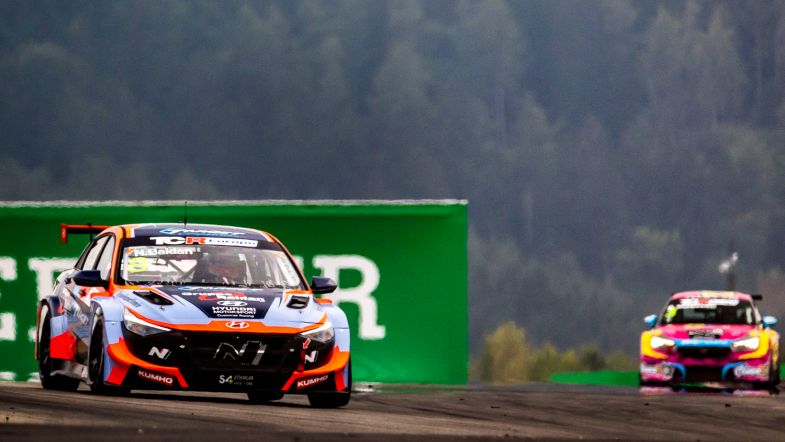 Nicola Baldan says he “needed” his second place in TCR Europe’s race at the Nürburgring to help him mentally bounce back from the previous round.

The first half of the season ended with difficulties for Baldan as he finished 12th and 13th in the two races at the Norisring in July. It was the first time he has failed to make the top ten on a race weekend, and he did not do any test days in the break of nearly two months before the Nürburgring round.

That event was shortened to one race, with weather disruptions forcing the cancellation of the second and also qualifying, which meant Target Competition driver Baldan started second on the grid based on practice times. He retained his position through the race, earning himself his best TCR result outside of Italy.

“This result is special to me, not because it is my second podium outside of TCR Italy, but because after the Norisring weekend, very negative weekend, I absolutely needed a great result,” he said to TouringCarTimes.

“Also this track for me is totally new, and for that I’m very, very happy for this result.”

Had qualifying gone ahead, Baldan thinks he had the pace in his Hyundai Elantra N to still qualify towards the front, particularly as his car had no success ballast.

“I think that I had the potential, I had the car, and I felt well with the balance so I think that it could have been a good position on the grid.”

He added it was “strange, but it was no problem” to jump straight into the race over two days after free practice had taken place, and thinks he could gain a third podium of the season in one of the final two rounds at Monza or Barcelona having now risen from 12th to seventh in the standings.

“It could be,” he said. “I need to keep the positions [if I qualify high], as at Norisring I felt I made mistakes. But if we keep the package as it is, I have the potential for the next rounds to be in front.”