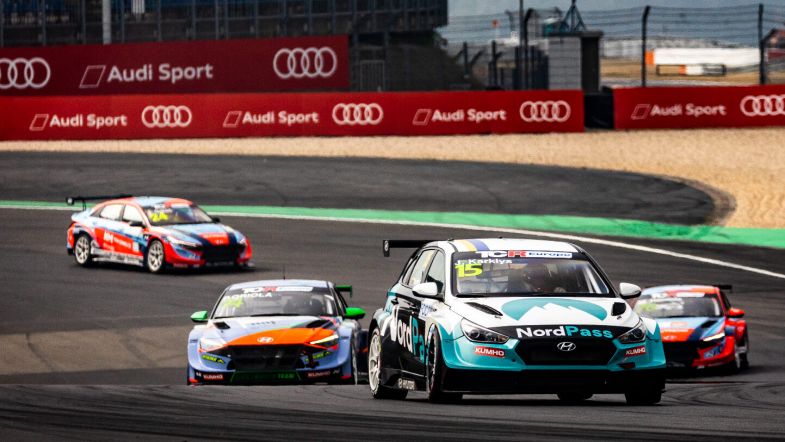 TCR Europe’s promoter Paulo Ferreira has told TouringCarTimes that the cancelled Nürburgring race is not set to be replaced, and has explained how the series worked on a solution through weather disruptions this weekend.

The Saturday timetable at the track was heavily impacted by fog surrounding the circuit through much of the day, with track action only beginning late in the afternoon. That meant TCR qualifying was cancelled and race two was cancelled as race one got moved from Saturday afternoon into its Sunday afternoon slot.

However the decision to postpone race one by a day did not come until late on Saturday night, as options were considered with the circuit to ensure both races could take place during the weekend. The possibility of race one occurring at the end of Saturday’s schedule looked unlikely due an 8pm curfew for racing at the circuit, but a DTM Classic race actually ran after that time.

With many drivers enthused by the idea of being able to run the lost race at one of the season’s final two rounds, TouringCarTimes asked Ferreira if that was a possibility.

“At the moment it’s impossible,” he replied. “Yesterday we talked with Monza, the timetable that they have, we can’t run an extra race. Don’t have enough track time to squeeze another race in. For Barcelona, at the moment as well. They can check at a later date, but I don’t think so that we can replace the race.”

The TCR Europe grid has included the Juta Racing team this weekend for a one-off drive by Jonas Karklys. Having paid to enter two races but now only being able to do one, the promoter can work to compensate the team if it enters another TCR Europe event in the future.

“If someone pays the entry to do two races, like always the promoter is here to discuss and to help them to do other racing in another round,” Ferreira explained. “But this is not our fault, this fog. We can’t control it. We can control a lot of things, but not the weather!”

In regards to the delayed decision to delay race one to Sunday, Ferreira admitted: “We are not happy with the situation, we are in the same position of the drivers and of the team managers, we can’t control it, unfortunately.

“The decision that the circuit communicated, it was at 19:23,” he added. “It’s a long conversation about that [delayed communication].

“The fog created a big mess for all in the morning. Then we were obligated to cancel the qualifying, because everybody imagined that the fog would move on so we can start the races in the early afternoon. The fog didn’t go, nobody can do nothing.

“Then you can say to me ‘but the TCR doesn’t run’. It’s true, because the particular regulations of the circuit has time to use the circuit, and the licence the circuit has is to do races until 8pm. When they finished the DTM Classic, it was at 8:15, already past eight. And then we need to do our race [next in the timetable], but the rules don’t permit and they postponed the race to today.

“In that case, today, when they have time on track to do a TCR Europe race, we will do the race one. Unfortunately, after our race [this afternoon], the space from the organiser of the circuit doesn’t have time to do the [TCR] race two. So in that case, they cancelled the race two.

“It’s difficult that the people [had this solution], we don’t like this situation, we are not happy with that. We organise TCR Europe, we promote it, and we organise it for everybody to be happy. Not to do races like that [being organised to run or postponed last-minute], but we can’t do nothing. We can’t control the forecast, unfortunately. And we can’t do what we want.

“When you start a race meeting, you need to follow the values and the regulations during the meeting. You have the regulations of the circuit, of the series, of the FIA, you have a lot of regulations. And one sends you to another, and that one sends you to another, and then the stewards still need to decide if conditions [are good enough to race] and they have to understand all those regulations. Not because you [the entrant] would like to race, we can’t. The rules are there, and we can’t change the rules during a meeting, it’s impossible.”