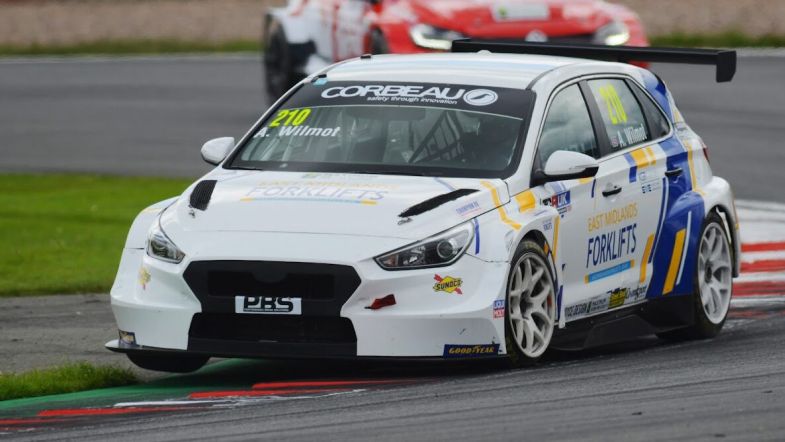 Andy Wilmot became the 10th different TCR UK winner in 13 races this season after fending off Jac Constable in a sensational second race at Donington Park.

The Jamsport Racing Hyundai driver led from pole position to clinch his maiden series victory, while the action was almost non-stop behind throughout the 21-lap encounter.

That action had big ramifications for the championship battle as Restart Racing’s Chris Smiley was taken out on the opening lap, while his chief title rival Isaac Smith also had an up-and-down race in his Race Car Consultants Volkswagen Golf.

Behind Constable, Race 1 winner Adam Shepherd capped off a strong weekend with third after getting the better of Bradley Kent’s Hyundai.

Having secured the reversed grid pole courtesy of finishing 10th in the opening race, Wilmot maintained his advantage off the start as Smith leapt from fourth to second by the time the field got to Redgate.

Behind, Chaos ensued as the Cupra of Jamie Tonks tagged the rear of Shepherd, who in turn clipped Smiley’s Honda at Redgate, forcing Smiley out of the race.

That incident, plus Smith’s second place, was enough to give Smith the provisional lead of the standings, but the VW struggled for pace throughout and his race eventually unravelled in the closing stages.

Wilmot, avoiding the action behind, quickly built up a margin of 1.576s from Smith, with the Hyundai of Max Hart up to third after making it past Shepherd and Bruce Winfield at Redgate.

Unfortunately for Hart, mechanical drama hit once again as a suspected tow link issue forced him out before half-distance.

On the same lap, Lewis Kent also slowed with a problem on the run down the Craner Curves, which bunched up the chasing duo of Matthew and Darelle Wilson. The Vauxhall Astra TCR of Darelle Wilson tipped Matthew Wilson’s Cupra into a wild spin over the grass and into the barriers, with the incident also causing damage to Darelle that forced him into the barriers at the Old Hairpin.

Smith then began to fall into the clutches of Constable and Bradley Kent, with Constable grabbing second at the final corner. Kent then perfected an excellent switch back move exiting Coppice to take third but Smith fought back down the inside of Redgate before going side-by-side through the Craners.

That brought the Hyundais of Shepherd and Alex Ley into the mix and, on the next lap, Shepherd was pushed into the side of Smith by Ley at McLeans, forcing Smith to go through the gravel and suffer rear-end damage.

The damage would eventually slow Smith so much that he dropped behind newcomer George Keler and Tonks on the final lap.

Such was the drama throughout the field that Heler’s stand-out performance was almost forgotten, as the endurance specialist secured a sensational seventh place finish on just his second-ever TCR UK outing.