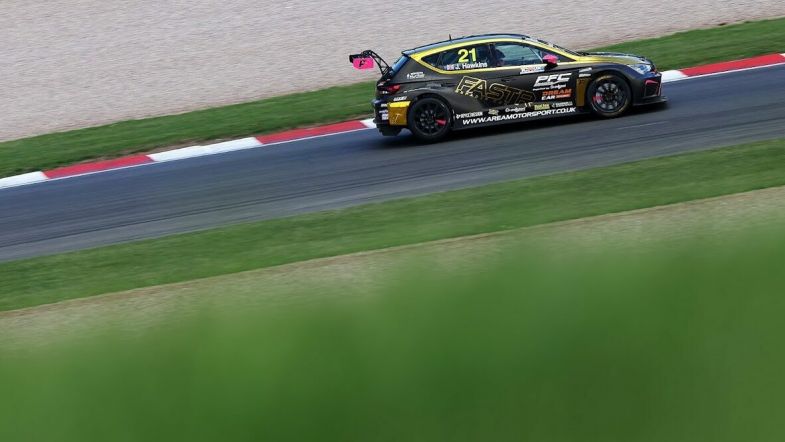 Running on the national configuration of the circuit, the Cupra driver posted a best time of 1:10.805 to beat team-mate Bruce Winfield by just over a tenth of a second.

Points leader Chris Smiley was third quickest for Restart Racing, while Isaac Smith was eighth in his Volkswagen Golf.

Smith was the initial pacesetter at the start of the 15-minute session, but was soon beaten by Hawkins’ first effort by nearly half a second.

The Cupras seemed to have the measure of the Donington circuit early on, with Jac Constable heading to the top of the times ahead of Hawkins.

Smith then moved up to second to get to within two-tenths of Constable’s time, but the latter improved again as Alex Ley took Smith’s second-quickest time in his Hyundai.

Entering the final two minutes, there was a flurry of action and improvements across the field, with Smiley’s time at the top of the pile lasting mere seconds as first Hawkins and then Winfield went fastest.

Hawkins then responded with the quickest time on her final effort to end the session just 0.138s ahead of Winfield, with Smiley a further 0.034s adrift in third.

Ley was fourth fastest, just over half a second off the pace, while Constable and Jamie Tonks were close behind.

Hart was seventh ahead of Smith, with Russell Joyce making it five Cupras in the top 10 with the ninth-fastest time.

The Hyundai Veloster of Lewis Kent was 10th quickest, two places ahead of his brother Bradley, with Ant Whorton-Eales 13th.

Languishing near the tail-end of the order was Adam Shepherd in 22nd, who failed to manage a representative lap-time after completing only three laps.

Next up for TCR UK is qualifying, which is due to take place at 10:50 BST.