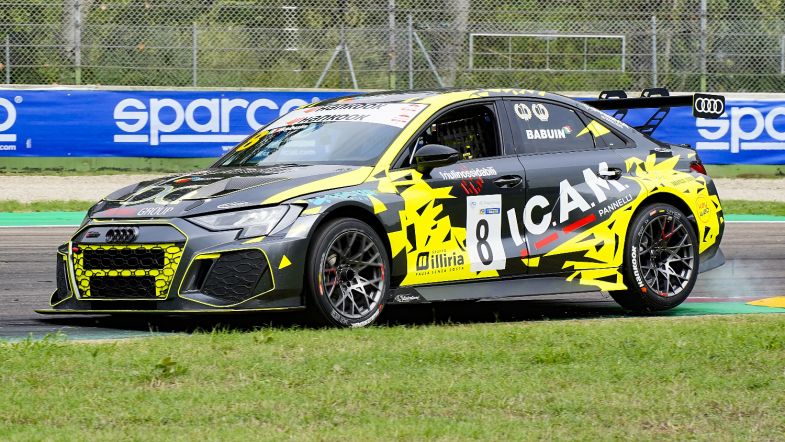 The pair shared the front row, with Poloni in front, and with points leader Salvatore Tavano just behind. He made the best start but got boxed in on the run to Tamburello, and the top three positions went unchanged.

Rather than fight each other, the trio stayed in formation and gradually pulled away from Cesare Brusa in fourth, who in turn had a small advantage over the fight for fifth between Mattias Vahtel, Niels Langeveld and Jimmy Clairet.

Initially involved in that squabble too was Carlo Tamburini and Felice Jelmini until the latter spun the former around and copped himself a 25-second penalty.

Despite how close many of the drivers were to each other, there were few attempted passes in the top 10, with Clairet making one attempt but ending up running the gravel and losing ground to Langeveld instead. That all changed though when the safety car came out as the leaders started lap 11, as Steven Giacon had come to a stop at the side of the track.

Racing resumed on lap 13, leaving enough time for four laps of racing. Straight away Clairet tried to pass Langeveld but went off at Tamburello, then at the final corner on lap 14 a forceful move down the inside of Poloni at the final corner granted Babuin the lead.

As Poloni was pushed off-line, it compromised his run onto the long pit straight and as a result he was almost immediately passed by Tavano too and then by Brusa before even reaching the next braking zone. Langeveld had been able to pass Vahtel, and he then lined up a move on Poloni that demoted him to fifth.

Vahtel followed him through, and Clairet tried doing the same but there wasn’t enough room and Poloni defended all the way to finish to prevent any further lost places.

Brusa joined the lead fight across the final two laps, but there was no risk-taking in the top three and Babuin pipped Tavano to victory with Brusa following them across the line in third.

Langeveld finished fourth, meaning the gap to Tavano in their two-way title fight has grown to 37 points, and Vahtel finished fifth.

Marco Iannotta, who finished second from pole position in Saturday’s race, was shown the black-and-white flag after chicane cutting and some dicey battles, and did not reach the finish of the race.

Tavano keeps his points lead ahead of the season finale on 342, with Langeveld second on 305 and Babuin third on 225 points.

The next TCR Italy finale will take place at Vallelunga on September 15-18.