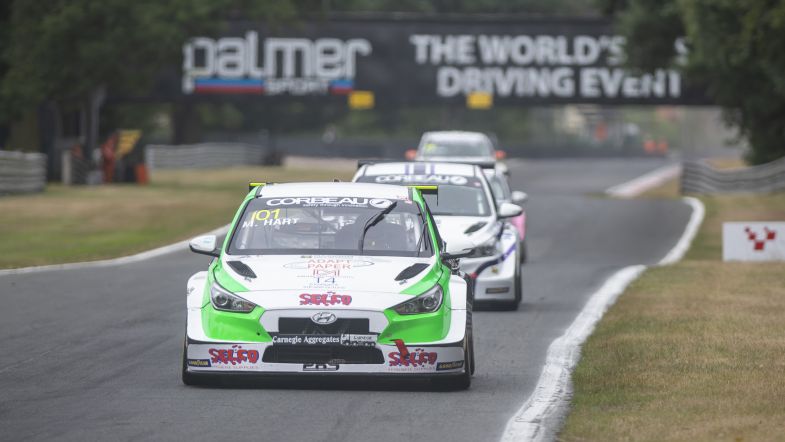 Max Hart has announced that he is to part company with the JamSport team with one round of the TCR UK Championship season still to run.

Hart was one of the form drivers in the early stages of the season with a brace of podium finishes at Oulton Park during the opening weekend of the campaign being followed by a double win at Donington Park.

However, the Irish driver’s championship challenge has been derailed over the last three meetings by a wretched run of form that has seen his Hyundai i30 N TCR fail to finish any of the last six races.

It leaves him out of title contention with just the Snetterton season finale still to run, with Hart taking the decision to look at alternative plans for the remainder of the year.

“Unfortunately due to a series of circumstances beyond my control, we have made the decision that it is best to part ways with JamSport Racing,” he said.

“Plans are fully underway for the rest of the year. I’d like to thank everyone for their continued support and I can’t wait to show you guys what we are working on!”

Hart’s departure from the JamSport line-up follows on from Andy Wilmot also taking the decision to leave the team on the back of the second Donington Park meeting, where he won the second race on the road before being excluded for an overboost – an exclusion that is now set to be appealed to the National Court.

Wilmot has yet to make a decision on which team to run with during the Snetterton finale and could yet decide to park his Hyundai in favour of a switch to a Honda Civic Type R TCR purchased from the Brutal Fish Racing team after it withdrew from TCR Europe.

The Honda is set to arrive in the UK next week having been purchased with an eye on 2023, but could be brought into action earlier depending on the results of a planned back-to-back test alongside the i30 N.

JamSport will continue to run the Subaru of Ant Whorton-Eales.