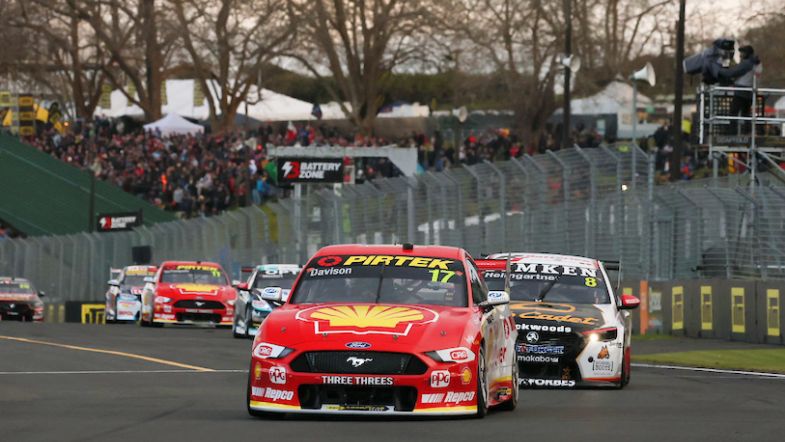 Will Davison survived a late caution period to secure victory in the opening race of the final Supercars meeting at Pukekohe.

Davison had qualified in second spot after a dramatic session saw him just miss out on top spot to Cam Waters, with Chaz Mostert and Anton De Pasquale sharing row and points leader Shane van Gisbergen only able to manage to score the seventh best time.

Things went wrong for Waters at the start as he bogged down when the lights went out, which allowed Davison to blast into the lead ahead of team-mate De Pasquale, with the pole sitter slipping back down to third spot.

Behind, Andre Heimgartner made up a spot to run in fourth ahead of Mostert, with van Gisbergen making up a position to round out of the top six.

Davison headed the early laps with a slender advantage over his DJR stablemate and was able to increase the gap at the front when the pit stops kicked off – with traffic becoming a factor as drivers lower down the order starting to make their mandatory tyre changes.

Thomas Randle was amongst the first drivers to come in and would rejoin ahead of the leader, with Davison able to clear him quicker than De Pasquale to extend his advantage to almost two seconds – helped by the fact that Waters was also now starting to put pressure on second spot.

De Pasquale was the first of the front-runners to come in for his stop at the end of the 17th lap, with Mostert then diving in a lap later – emerging ahead of the Ford having been able to gain time in the pits when De Pasquale went in too hot and appeared to miss his mark.

Heimgartner was also able to make up a spot to get ahead of Waters when the pair then came in to make their stop together, with Davison retaining the de facto lead of the race when he then dived in for two new tyres.

Van Gisbergen elected to go long in a bid to make up ground in the Triple Eight Holden and took a gamble when he came by becoming the only driver to change three tyres rather than two.

That cost him position on track as he slipped behind Scott Pye to run seventh amongst those to have stopped, but also gave him an advantage over the cars ahead with fresher rubber – as he showed by quickly reclaiming position from Pye within a handful of laps.

Davison continued to lead heading into the final ten laps but his advantage would disappear when the safety car was deployed to recover the car of Macauley Jones from the edge of the back straight, where it had come to a halt with damaged steering.

Just five laps remained once the action got back underway, but Davison was able to keep Heimgartner at bay to secure the victory, with Waters rounding out the podium spots in third.

Mostert took fourth spot ahead of van Gisbergen, who took advantage of his improved tyres to make a move stick on De Pasquale two laps from home.

Behind, Broc Feeney, Nick Percat, David Reynolds and Pye rounded out the top ten; the latter having lost ground when he ran wide just after the restart.

Aside from Jones, Tim Slade would be an early pit retirement after contact with James Courtney on the opening lap saw him broadside in the middle of the field and lucky to avoid being collected by any of the chasing pack.

Jake Kostecki would lose a wheel in his stop which cost him time, whilst both Jack Le Brocq and Bryce Fullwood were forced to make lengthy pit stops after suffering power steering issues.