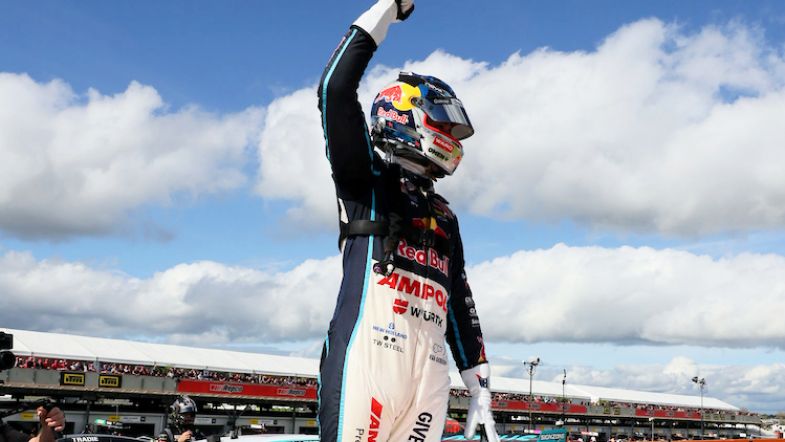 Shane van Gisbergen cemented his advantage at the head of the Supercars standings with a double win as Supercars bid farewell to Pukekohe.

Qualifying for the final two races at the New Zealand circuit saw van Gisbergen and Will Davison grab the final pole positions on offer before two dramatic races brought the curtain down on racing at the venue.

Starting alongside team-mate Broc Feeney, van Gisbergen held onto the lead at the start of race two with the pair split by Saturday winner Davison.

His team-mate Anton de Pasquale however endured a wretched start that saw him drop back from the second row of the grid before contact with Brodie Kostecki saw him turned into the wall – causing extensive damage his car and putting him out of the race.

Further round the lap, Mark Winterbottom and Will Brown then tangled – resulting in Brown going off into the barriers at speed at pit entry, damaging the barriers and leading to a 20 minute stoppage.

Van Gisbergen held onto the lead when the action then resumed with an ultra late restart despite the best efforts of Davison to sneak ahead, although his bid for the lead on the first lap would instead lead to him being shuffled back down the order as Mostert and Waters got ahead.

As the stops cycled through, van Gisbergen was able to hold on at the front to secure the win from Mostert and Waters, with de Pasquale, Scott Pye and Andre Heimgartner rounding out the top six.

The final ever Supercar race at the circuit kicked off with Davison on pole ahead of Waters and De Pasquale, with DJR having worked hard in the gap between races to ensure the #11 Ford was able to take part.

Davison held station at the front when the lights went out ahead of Waters but there was drama behind as contact in the pack saw James Courtney spin off and clatter into the wall at turn one.

The heavy impact would see the safety car immediately deployed to allow Courtney to climb from the damaged Mustang before further work was required to repair the barriers – meaning it would be lap twelve before racing was able to resume.

As a number of drivers down the pack gambled on coming straight in for their mandatory stops, Davison looked to quickly build a lead over Waters at the front of the pack but was unable to build much of a gap – although the top two would break away from De Pasquale.

Feeney in fourth was the first of the leading pack to come in to stop on lap 18 and that triggered his direct rivals into action as both De Pasquale and Heimgartner running behind the teenager dived in a lap later.

Heimgartner would be the big winner as a quick stop allowed him to jump De Pasquale in pit lane, whilst he then rejoined the circuit just ahead of Feeney as he slotted in between the pair.

Waters and Davison quickly followed suite with their stops but Davison’s bid for victory then ended when his car was dropped from the jacks before the left rear wheel had been properly secured.

That meant a slow lap back to the pits to have another tyre fitted to the car before a penalty was handed down for an unsafe release.

As the remaining stops cycled through, Waters inherited the lead of the race, with Heimgartner now running in second spot and van Gisbergen sitting third having gone longer on his first stint to benefit from clear air on track.

The points leader rejoined just ahead of Feeney and the pair almost came to blows into turn two as the teenager was forced to hit the brakes to avoid his team-mate.

A mistake for Waters that saw him run wide across the grass allowed the pair behind to close in and make it a three way fight for the lead – with van Gisbergen managing to sneak ahead of Heimgartner into second to set up a ten lap battle with Waters for the victory.

Van Gisbergen made his bid for the lead on lap 35 when he got down the inside of Waters at the hairpin to run side-by-side with the leader, with the pair then making contact through the high-speed final corner before van Gisbergen was forced to yield.

Four laps later however, van Gisbergen was able to get a run out of the hairpin to once again draw alongside the leader and the home hero hit the front to the delight of the watching crowd.

Despite starting back in eighth spot, van Gisbergen took the flag to secure the final Supercars success at Pukekohe ahead of Waters and Heimgartner, with Feeney, de Pasquale and Mostert rounding out the top six.

The win gave van Gisbergen the Jason Richards Memorial Trophy for a third time and enabled him to cement his advantage at the head of the standings as the series now prepares for Bathurst next month.