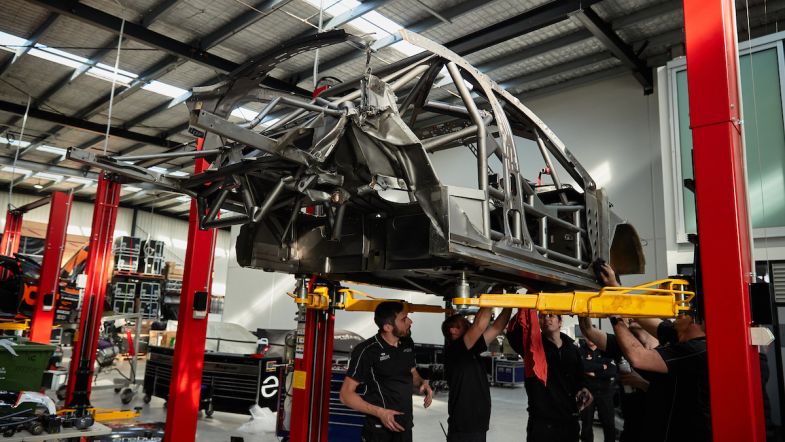 Erebus Motorsport has confirmed that it will be able to run three cars as planned in the Bathurst 1000 following a full assessment of the chassis damaged in the most recent Supercars event at Pukekohe.

Will Brown’s car was subject to a 56g impact with the wall at pit entry in the second race of the weekend in New Zealand following contact with Mark Winterbottom, leading to questions over whether the car could be fixed for the biggest event on the Supercars schedule.

As a result, questions were then raised over whether the damage could impact on the planned wildcard entry for Richie Stanaway and Greg Murphy – although the team insisted it remained committed to running the car.

Having been able to get the damaged car back to base in Melbourne, investigative work has shown that Brown’s car can be repaired despite appearing to be worse than initially thought once the shell had been fully stripped.

“The guys have had a proper look at the car and we believe we can fix it in time for Bathurst,” team boss Barry Ryan said. “We’ve got it to Mount Gambier and on the jig this morning, the whole rear of the car is getting cut off and we’ll replace it all.

“Once it’s done, we’ll get it to paint and then back in the workshop and start to replace all the componentry and bodywork.

“Almost every tube in the back half of the car has either been torn, twisted or bent. Items like our gear box, fuel tank housing, drive shafts and suspension components also need to be repaired or replaced.

“We knew there had been substantial damage, though you always find more as you start to pull parts and panels off it.”