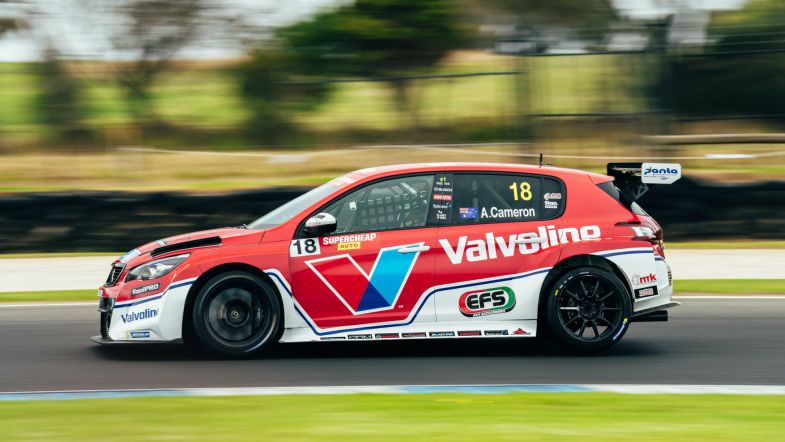 Aaron Cameron survived a last-lap dive from Jay Hanson to win a shortened opening TCR Australia race of the weekend at a soaking wet Sandown.

The Team Valvoline GRM Peugeot driver led every lap after getting the jump on polesitter Hanson at the start and held onto his advantage either side of two safety car interventions.

Both Audis of Hanson and third-place finisher Will Brown looked faster than Cameron but could not find a way past at key moments.

Hanson tried an ambitious lunge down to the inside of Cameron as the pair entered Turn 5 at the end of the back straight, but spun out of second place as both ran wide.

Brown therefore was promoted to second, with Zac Soutar’s Honda completing the podium.

Having taken pole position in qualifying earlier in the day, Hanson had the theoretical advantage at the start, but got too much wheelspin and dropped behind Cameron into the first corner. Hanson then had to fend off the fast-starting Brown, who snuck down the inside of his Audi brand-mate at Turn 2.

Visibility down the back straight was appalling and heavy spray meant few cars except Cameron could see very much.

Despite this, the top three of Cameron, Brown and Hanson found themselves right together from the third lap and the order nearly changed as a slowing Dylan O’Keefe ground to a halt at Turn 2, before coming back to life just as the leaders approached.

O’Keefe’s car did not last much longer and the Peugeot stopped on the back straight, prompting the first safety car intervention.

Cameron led off the restart but this time Hanson found his way past Brown, who slid deep at Turn 2.

It wasn’t long before the safety car was out again, as Michael Clemente’s Honda Civic Type-R got beached in the sodden grass after running wide at Turn 1.

The order remained the same at the next restart, but organisers elected to call a timed race, leaving just one lap left to run.

This gave Hanson the motivation he needed to hunt for the victory, and the Audi nearly got alongside on the main straight heading into the first turn.

Hanson then got a strong exit from Turn 4 and looked to have the move completed on the fast approach to Turn 5, before both ran onto the run-off area. Slight contact appeared to have been made, and Hanson slewed off track, somehow missing the barriers.

That elevated Brown to second and Soutar to third, while the Wall Racing Honda of Tony D’Alberto claimed fourth at the flag.

Race two at Sandown is scheduled to take place tomorrow at 04:55 CEST.