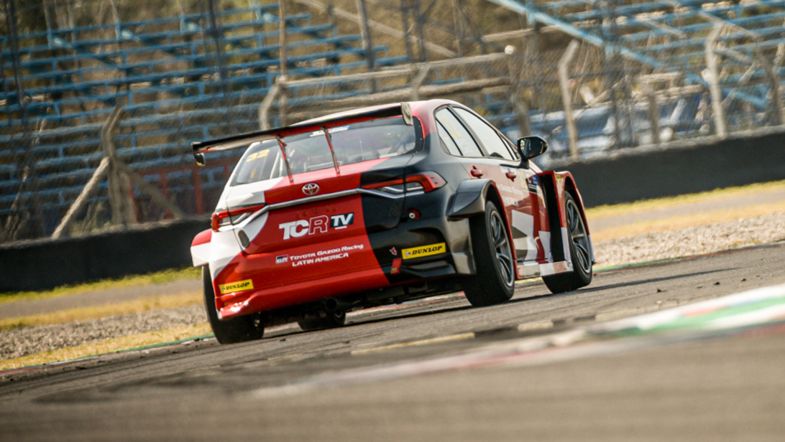 Jorge Barrio made history by claiming the maiden pole position for the new Toyota Corolla TCR at Buenos Aires, host of the seventh and penultimate round of the 2022 TCR South America season.

The session started with a 25-minute delay due to timing problems. The Q1 session was then red-flagged after just six minutes after Ignacio Montenegro (Audi RS 3 LMS) went off the track and got stuck in the gravel.

The car was recovered and then returned to the pits under its own power, although Montenegro couldn’t participate any further in the qualifying, with the session resuming with 14 minutes on the clock.

Raphael Reis (Cupra Leon Competición), with a strategy to qualify in tenth place for the Race 2 reversed grid pole position, made his first outing in the session as the track was green-flagged again.

Toyota driver Barrio shot to second place in the Q2 with just four minutes left on the clock, as Rosso continued improving his lap time at the front of the classification.

The second part of the qualifying started with all the twelve drivers taking to the track and Urrutia going slightly off the track during his warm up lap.

Barrio set the fastest time after his first lap, half-a-second ahead of Rosso, who pitted quickly for new tyres, as well as the Lynk & Co drivers.

The fight for the pole position came down to the wire, with Rosso, Urrutia and Casella setting purple sectors after each other.

Barrio claimed the pole position ahead of Rosso, 0.134 seconds behind, with Urrutia in third place, 0.648 seconds off the pace.

Sapag was fourth, followed by Casella, Pezzini, Farina, Rizza, Lusquiños and Reis, who achieved his target of tenth place.

“I’m grateful to Toyota Argentina for their support,” said Barrio after the session. “I had a great first lap, had a small problem in the second one and we will fix it ahead of tomorrow, but I’m happy and feel confident.”

After the qualifying session, Pezzini leads the championship with 408 points, 63 ahead of Rosso.