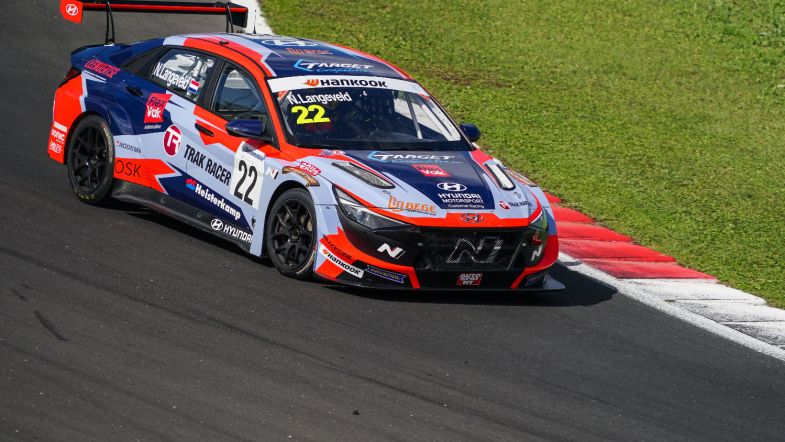 Niels Langeveld reduced Salvatore Tavano’s TCR Italy points lead after a day of drama for the pair at Vallelunga, leaving them just 14 points apart going into the title decider.

The chances of a close conclusion to the championship increased when Target Competition’s Langeveld took pole and Cupra driver Tavano could only go 11th fastest in qualifying.

What’s more, Tavano’s team then appealed to the stewards about contact between its driver and Target’s during qualifying. It was determined neither driver was predominantly to blame, so no penalty was issued.

Poleman Langeveld was also investigated about “the alleged violation of the return to Pit lane from the display of the red flag”, but stewards again did not proceed with any sporting punishments and so Langeveld kept his pole position for the day’s race.

He converted it into a comfortable win, making a strong enough start off the line to prevent any opening lap attacks but then nearly throwing it away with a lengthy left-rear tyre lock-up that sent him off the track.

He came back on alongside the chasing Baldan and Ruben Volt, who had been side-by-side themselves most of the lap, and had done just enough to keep the front of his car ahead when the safety car came out following multi-car collisions at the back.

Green flag action resumed with 16 minutes to go, and Langeveld nailed the restart by accelerating as early as possible and creating big gaps through the field as he caught everyone out.

That enabled him to be alone up front until the safety car came out again with six minutes left on the clock, and in that period the battle for second had heated up between, two, three and then four drivers.

Baldan had lost second to Volt, but after the second restart he reclaimed it exiting the long turn seven-hairpin and then raced away to leave Volt to resist Denis Babuin. However a diving move by Tavano disposed him of fourth place, and meant he limited Langeveld’s cut into his points lead.

There are 40 points available to score in Sunday’s season finale, meaning another fourth place finish would crown him champion regardless of where Langeveld finishes. Race two begins at 09:50 CEST.