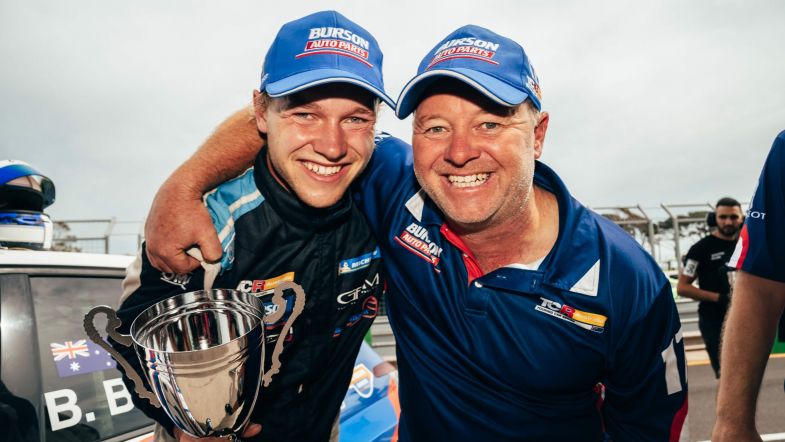 Burson Auto Parts’ Ben Bargwanna claimed a dramatic last-gasp TCR Australia victory at Sandown as both he and leader Jordan Cox aquaplaned at the final corner following a torrential downpour.

The pair had held the top two positions after a safety car restart but heavy rain hit the circuit for the final lap of a timed encounter before chaos ensued.

Cox lost control of his GRM Peugeot 308TCR approaching the last turn, narrowly avoiding contact with Bargwanna who also locked up at the chicane. Both slewed through the sodden gravel before finishing ahead of Melbourne Performance Centre Audi’s Will Brown.

“Those conditions on the last lap were just crazy,” said an ecstatic Bargwanna post-race. “I think five or six of us went out on the dirt at the last corner, but far out, that was great. The team did an unreal job, what a turnaround.”

Conditions were damp at the start of the race and polesitter  Bargwanna bogged down off the line, allowing Moffat to assume to lead on the run towards the first corner with the fast-starting Jordan Cox in second.

Keen to make amends, Bargwanna hung it around the outside of turn one with the HMO Customer Racing Hyundai of Josh Buchan, who then clipped the rear of Michael Caruso’s Alfa Romeo.

Caruso was spun around but continued, while Buchan’s race ended in the barriers.

Moffat continued to lead after a brief safety car to retrieve Buchan’s car, with Cox in hot pursuit.

The Peugeot 308TCR of Cox was the faster car and began to pressurise Moffat’s Renault Mégane for the lead. After a few patient laps, Cox dived for the inside of turn eight to seize the advantage, with Bargwanna also making his way through into second.

That proved to be the cork in the bottle and Hanson’s Audi, which had charged all the way through from 16th on the grid, was suddenly all over the back of Moffat.

Where Cox had been patient, Hanson made a bold move at turn four but clumsily tagged the back of the Renault, sending both into a spin. Behind, points leader Tony D’Alberto in the Wall Racing Honda nearly got caught up in the melee but escaped in fifth place.

While behind the second safety car of the day, the heavens opened as a downpour hit the circuit, forcing organisers to convert the originally planned 22-lap race into a timed affair.

Upon resumption, just one lap was left to run, with Cox leading from Bargwanna, but both lost control of their cars before the finish.

As the pair sailed through the gravel, it was Bargwanna who reached the line first, a second clear of Cox who in turn was just three-tenths ahead of Brown in third.

D’Alberto collected more points for his title push in fourth, ahead of another Honda of Zac Soutar who also cut the chicane.

Michael Clemente finished sixth, with Dylan O’Keefe seventh from 17th on the grid in his GRM Peugeot. He finished ahead of Luke King’s Hyundai, with Buchan able to restart from his first-lap contact to claim ninth while Iain McDougall was 10th in his MPC Audi.

The final race of the TCR Australia weekend at Sandown is scheduled to take place at 16:10 local time (07:10 CEST)