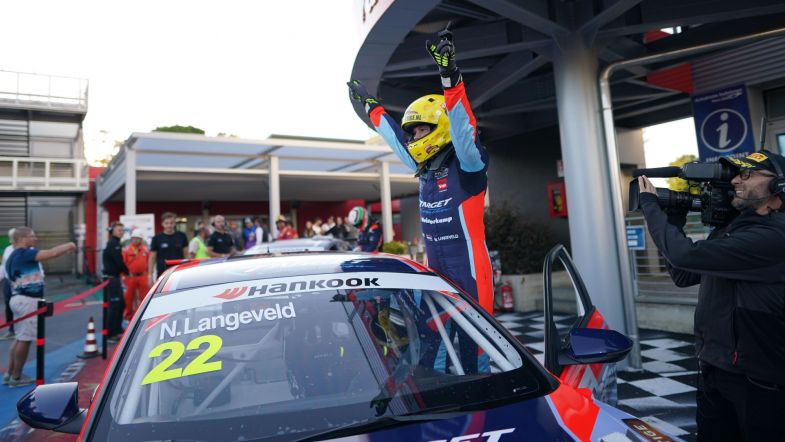 Niels Langeveld has been crowned TCR Italy champion in a chaotic title decider at Vallelunga in which title rival Salvatore Tavano ended in the barriers.

Pole position and victory on Saturday has brought Langeveld into a position to overhaul points leader Tavano in Sunday’s race, but then overnight the stewards penalised Tavano for contact between the pair in the first race and it meant Langeveld started the season finale atop the championship standings.

Langeveld started eighth on the grid and Tavano started 11th for the all-important race, with RC2 Junior Team’s Felipe Fernández on reversed-grid pole.

Fernández was able to convert that into a comfortable victory, his first of the season, despite several safety car interruptions and a lot of panel-bashing in the battles just behind him.

Ruben Volt jumped from sixth to second on the opening lap, while Langeveld and Tavano each rose two places. Their progress up the order was stalled by the first safety car period, and when racing resumed the title hopes of Tavano started to unravel.

At the tight Torantino left-hander hairpin he was knocked around by Langeveld’s Target Competition team-mate Cesare Brusa, who had been trying to make a lunging pass on Jimmy Clairet. With some incredible quick-thinking and driving skill, Tavano was able to spin his tyres to get his car facing the right away again and accelerated away again – avoiding being collected by the drivers behind – but way down the order.

Langeveld meanwhile had worked his way up to fourth ahead of Volt, and behind Felipe and and Ruben Fernández and Denis Babuin.

On the next lap it only got worse for Tavano, as he made side-on contact with a car at Curva Grande that led to him spinning off at high-speed and a car-wrecking collision with the outside barriers. Paolo Rocca and Levente Losonczy also went off that lap and retired,

That required the safety car to be called out, and Fernández nailed his restart in the lead while Langeveld started attacking Babuin for third. That soon became a five-car battle for second, and led to more drama as Babuin twice made contact with Ruben Fernández before spinning him around while trying to make a pass.

Behind them there was also contact and a spin between Sylvain Pussier and Rammo Antti, lessening the pressure from behind.

The battle for second spread out before the race was put under full course yellow conditions until the finish as Pussier’s Cupra Leon Competición was stuck in the gravel, and before then Langeveld had been able to get into third by passing Baldan as both were jumped by Volt when the second-placed Férnandez was spun around.

By completing the podium, Langeveld did more than enough to secure the title and said it left him “lost for words” before adding it made up for “all this bullshit yesterday” and the weekend results “proved we are the real champion”.