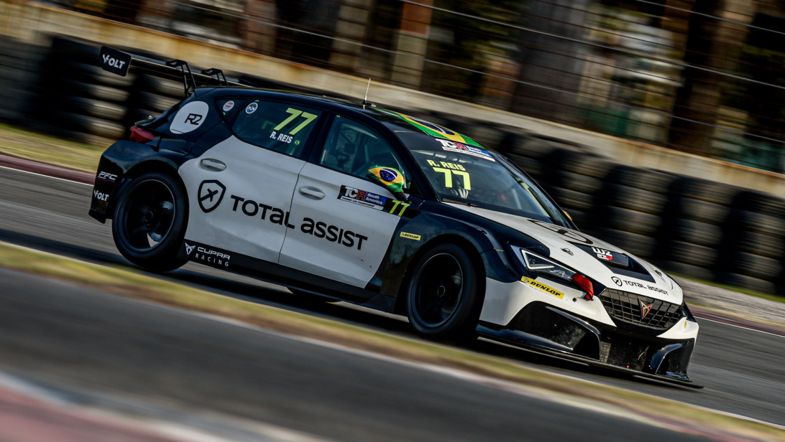 Reis took the lead as the lights went out, followed by Gabriel Lusquiños (Audi RS 3 LMS) and Pedro Aizza (Hyundai i30 N TCR). Further back, Pezzini collided with Juan Manuel Casella’s Peugeot 308TCR, with Casella going off the track but able to return on his own power.

Pezzini was able to climb to fourth place on the second lap. His fellow Lynk & Co team-mate José Manuel Sapag, who changed gearbox before the race, had to retire on the track with mechanical issues on lap three.

Aizza came under fire from Pezzini for third position, with Franco Farina (Peugeot 308 TCR) also mounting the pressure from fifth position, as Reis clocked another fast lap to increase his gap at the front.

Pezzini overtook Aizza for third place on lap five, with the championship leader now focussed on closing the gap to Lusquiños.

Further back, Race 1 winner Jorge Barrio (Toyota Corolla TCR) was on the move, climbing back from tenth on the grid to sixth place on lap seven.

Juan Angel Rosso suffered a water and oil temperature problem issue in the second part of the race, dropping to tenth place on lap 16.

Meanwhile, Barrio overtook Montenegro on lap 17 for fifth place, but Montenegro fought back to reclaim the position a lap later.

Enrique Maglione (Peugeot 308TCR) went off in spectacular fashion and hit the tyre barriers on lap 19, with yellow flags waved at that point as the field completed the last lap of the race.

Reis claimed the victory at the chequered flag, with Lusquiños in second place and Pezzini completed the podium.

Farina was fourth, followed by Montenegro and Barrio. Aizza finished in seventh place, with Casagrande right behind. Rosso managed to limp to ninth position, with Casella completing the top ten.

Pezzini heads to the last round of the championship with a 43-point advantage over Rosso, with 91 points still in play.

The next round of the TCR South America takes place at San Juan (Argentina) on the 8-9th of October.